The Corpse of Grenfell Tower 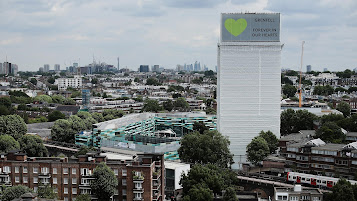 Interesting story in the NY Times today reminds us that the burned out shell of London's Grenfell Tower still stands, wrapped in white plastic, while people argue over what to do with it. 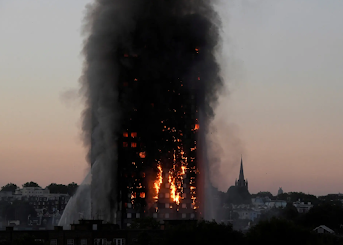 On the one hand, land in London is very expensive, and the obvious way to use this space would be to tear down the wreckage and build a new tower. But I'm not sure the socialist housing apparatus that built it even exists in modern Britain, at least in the form that went around building all those flimsy towers. So the project would have to be given to a private developer, with all the attendant struggles over affordability etc. 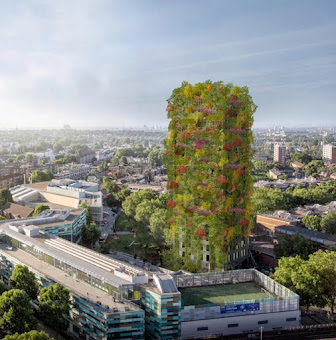 Meanwhile the government has convened a Memorial Commission made up largely of survivors and people who lost relatives in the fire, and they want the space to be maintained as a memorial to the victims. They do not, however, agree on what kind of space. Some want the tower to remain in some form, while others want it demolished; one said he won't visit London again until the thing is torn down because seeing it is too painful.

The Times story finds a running theme of a desire for justice, that somebody be punished:

“It shouldn’t come down until justice is served,” she said, because otherwise it would be a case of “out of sight, out of mind.” Until there is some accountability and a clear idea of what to do with the site, she said, “I think it should remain.”

But this is ultimately just wrong. No single person was responsible for the shoddy construction of this and other towers. They were born from a program conceived in the ruins left by the Blitz, to rapidly rebuild London's housing stock. That program morphed over the years, and by 1970 when Grenfell was approved it was focused on providing affordable housing to London's working class. Britain was not a very rich country in the 1960s, so money was tight. Design decisions were made with cost as a major concern, and corners were cut. Then came the Thatcher years and the government's turn against public housing, which put pressure on the maintenance budgets for all these buildings. In the 1990s the local government created a quasi-private entity to manage it public housing, with residents on its board. The building actually received a major renovation in 2015-2016, and engineers certified it as fire safe.

So who would you blame for all of this? It is, more or less, the whole arrangement of Britain that is responsible for working class people living in far from perfect housing: economy, society, government. Plenty of people want to blame Thatcherism, but the Tower was actually safer in 2017 than it had been in 1980 when it opened. The factor that ultimately doomed most of the victims – that the building had only a single fire stairway – was part of the original design and represented 1960s thinking about how to design fire-safe buildings, widely shared across the architectural profession.

For people who think our society has tied itself in so many knots that we can no longer do anything, Grenfell is a great example. In the midst of a grim housing shortage, a valuable block of publicly-owned land is tied up in endless wrangling over what to do with the spot, driven partly by a thirst for revenge that makes little sense. Dictator Elon Musk would have replaced it with a gleaming new tower by now. But we are just not willing to wave away the kind of human pain created by a disaster like the Grenfell Tower. Ukraine may be experiencing such disasters at a rate of about one a day, but should that matter to how we treat the victims of this one disaster?

I was very cynical about the long struggle over Ground Zero in New York, but it seems that in the end a decent solution has been reached. We ended up with new buildings, a memorial, a museum, and, as a side benefit, new transportation infrastructure paid for with Federal money released by the national disaster. So our complex, everyone-gets-a-say process can work.