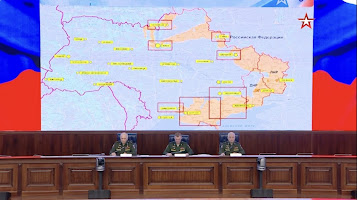 Russian generals holding a briefing in front of a map of Ukraine that western analysist think is badly wrong. Polina Ivanova summarized part of the briefing like this:

Russia had never intended to capture Kyiv, Kharkiv and other cities, the generals said - these are not setbacks in other words, it's all part of the plan. And the plan was to distract Ukrainian forces while Russia/ Donetsk/ Luhansk made territorial gains in the east.

This inspired a lot of tweets along the lines of:

Japanese combined fleet: we never intended to take Midway. Phase I was a complete success. 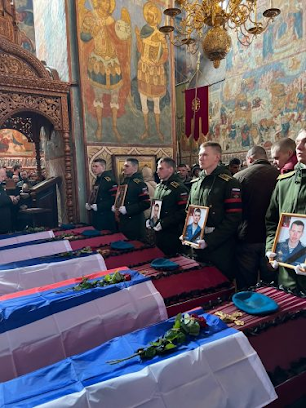 Funeral notices coming out of Russia confirm that the 331st VDV (air assault) regiment, heavily engaged since the first day of the war, has lost its commander, deputy commander, and two of its four battalion commanders. Losses among the troops seem equally high. The photo above shows the funeral of five men of the regiment, held on March 21.

With the full connivance and sometimes with the full encouragement of the ruling elites, the infamous cancel culture has turned into the cancellation of culture. Tchaikovsky, Shostakovich, Rachmaninov are being removed from concern programs. Russian writers and their books are being banned as well. The last time we had the destruction of so much unsuitable literature was 90 years ago under the Nazis in Germany. We know and remember very well the footage from film archives of books being burned. Not long ago children’s writer Joanne Rowling, whose books have sold hundreds of millions of copies around the world, was cancelled because she displeased the advocates of so-called gender freedoms. Today they are trying to cancel the whole county with a thousand-year history, our people.

Critiques of Western cancel culture are possibly not best made by those currently slaughtering civilians for the crime of resistance,

Some thoughts from satirist Darth Putin:

Because the US invaded Iraq, which was wrong, it means that anything Russia military does is by definition not wrong. Western military intervention causes misery & terrorists. Russian military intervention causes joy & unicorns.
A secure international border has Russian troops on both sides of it.
If NATO supplies coming into Ukraine were marked "children", our Air Force might be able to attack them.

A random assemblage of words from the war:

Our city is being destroyed from the face of the Earth,

We have a good life, We must be able to defend it.

– a Lithuanian doctor to the NY Times

Kyiv is being bombed and we realized this is probably the only such real chance — the last chance — to win back Belarus, protect Ukraine and actually make this world a better place.

–A Belarussian volunteer, in exile since 2020, fighting for Ukraine

We have no choice. They are fighting for us.

– Lithuanian man who donated his SUV to Ukrainian forces

– Intercepted phone call from a Russian soldier in Ukraine

God takes the very best ones.

NOTHING IS HAPPENING. Walk on by. A special operation is underway. No one is growing poor. The economy is growing.

The hunt for traitors now endangers virtually everyone in Russia.

We are in the middle of the longest, saddest, most excruciating and unsatisfying "In told you so" in the history of the world.

– Mother of a dead Russian soldier says of Ukrainians

Not have a home, to have nowhere to go back to, it’s very scary. Kharkiv is gone now. They erased it.

Russia was bent on violence from the start.

We will fight to the end. We will not give up and we will not be defeated. . . . It will be victory when weapons fall silent and we can hear people speak freely again.