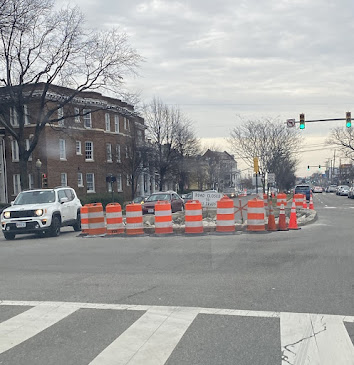 I was in Richmond, Virginia over the weekend, and happened to drive by the spot where the statue of Stonewall Jackson used to stand. And the former Monument Avenue, shorn of its monuments, has been renamed Arthur Ashe Boulevard. 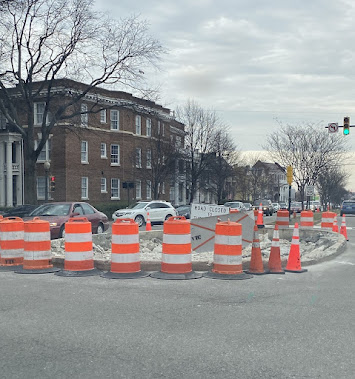 The sight inspired conflicting emotions in me. I'm no fan of Confederate heroes, but they were nice statues, and part of a beautiful, distinctive streetscape. Now there is just rubble and traffic barrels. And no plan to put anything here instead; the statues were removed under an emergency order from the mayor, amidst the George Floyd protests, and if anyone is thinking about new monuments I haven't heard about it.

There is, these rubble-filled holes seem to say, nothing to celebrate any more, nothing anyone cares enough about to put up a monument to it.

Looks like that rubble remains from the removal of the statue's (gigantic) pedestal just over two weeks ago. As for what comes next, the Virginia Museum of Fine Arts is scheduled to have a plan ready in September. I'm sure everything will go smoothly.

There is, these rubble-filled holes seem to say, nothing to celebrate any more, nothing anyone cares enough about to put up a monument to it.

How odd. To me, all those holes seem to say - "change takes time".

Those holes are temporary. People have plenty to celebrate, plenty that they about enough to put up monuments to. But these things take money, and planning, and permits, and all the rest.

You know all about that, John - your own field of work is full of lengthy delays for all the same reasons. And yet no one goes around lamenting all the yet-unexcavated archaeological sites out there, and how they "seem to say" that there is nothing to be curious about anymore and nothing anyone cares enough about to dig up and preserve and learn from.