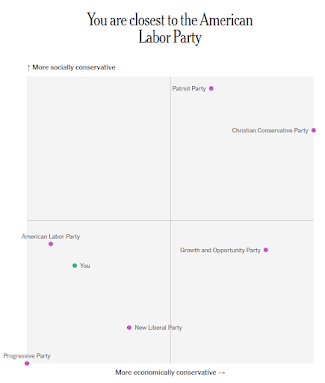 The NY Times has a quiz up which places you in one of six imaginary political parties. I scored closest to the American Labor party. I think ten years ago I would have scored more socially liberal and more economically conservative, but it happens that on some of the cultural issues taking center stage right now (immigration, police funding) I am fairly conservative, while on the central  economic issues (minimum wage, spending on public transit, higher taxes on the rich) I remain liberal.

Thinking about this I feel that over the past decade I have stayed the same while the landscape has shifted underneath me. My position on immigration (a good thing in moderation) was pretty liberal then, before the left shifted to open borders and abolishing ICE. Likewise on the police; my readers know I have been complaining about misconduct by cops and prosecutors for decades, which made me a liberal in 2005, but I am completely not on board with defunding the police.

That was not true of the previous decade, when torture and black site prisons and what all drove me to the left in foreign policy and Wall Street madness drove me left economically. I recognize that events then changed my views substantially. But I feel like lately I have been pretty consistent. Does anybody who has been following me for a long time disagree? I'm curious. I'm also interested to hear how anyone else with NY Times access scores.

I do not know you long enough and, more importantly, good enough to comment, all I can say is that I think your experience is quite common one. I have exactly same feelings (both in direction of my opinion shifting and in some cases opinion staying the same, but landscape shifting).

You and I land in almost exactly the same spot!

I found this quiz pretty odd. The results place me quite a bit closest to American Labor but declared me to be a Progressive. I even measured it on my computer screen: I'm about 1.5 inches from American Labor and 2.5 from Progressive. I'm not sure what to make of that. In addition, the questions as a whole seem focused on progressivism, perhaps even on isolating progressives from everyone else. There's a question on defunding police, but not one, for example, that asks you to agree or disagree that the 2020 national election was rigged. Surprisingly, there are no questions related specifically to Covid issues like mask mandates; there's just one vague one about science (and plenty of anti-vaxxers and anti-maskers and even creationists think they're listening to "the science," or are at least quite ready to employ that rhetoric).

All that said, I'm certainly not at all surprised that the results would put you at American Labor. The beliefs you've declared on bensozia over and over--basically, melding of capitalism and socialism--would seem to put you there. That said, a questionnaire like this and the resulting conclusions are a pretty superficial way to describe a person's beliefs. For example, let's face it, the tone in which you convey your faith in the melding of capitalism and socialism is almost always pretty resigned. It's often accompanied by words indicating that, as far as you're concerned, melding capitalism and socialism is pretty dull, but there's nothing better on offer.

What seems to excite you politically--again, let's be honest--is attacking the left. The left certainly says a lot of dumb things. But attacking their stupidity really gets you going. The right also says a lot of dumb things. But your main reaction to Trumpism has been it's up to liberals to show forebearance and be the adults in the room. I suspect that at bottom for you, behind Trumpism's dumb particulars is a legitimate and understandable working-class resentment against cultural elitism and being pushed around by history. Would that be fair? Either way, I think my own feelings about the hard left are roughly a mirror image of the feelings I see you having about the right.

Aside from the paywall, I don't like the idea of party affiliations and am registered as an Independent, thus it seems like taking the quiz flies in the face of that stance.