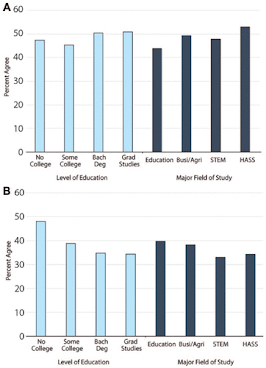 This article throws big data sets and powerful statistics at the question of whether college makes people more liberal. There answer is, that depends on what you mean by liberal. The authors note that when this debate first got going, in the 1960s, conservatives mainly complained that higher education promoted moral relativism. This is the opposite of what happens in college now (B in the graph above), with graduate students showing much less moral relativism than the less educated.

The other thing shown in the graph is moral progressivism (A), which the authors define as "a high level of concern for others and relatively low concern for traditional social order." That seems to me to be a tricky thing to measure, very sensitive to the particular issues you ask about. E.g., liberals might have a desire to defend traditional public schools, while conservatives might not be very interested in protecting that particular bit of the social order. (Unless they are high school football fans.) Business-allied conservatives support some parts of the social order but love "disruption" in the marketplace. And you can see from the graph that while moral progressivism correlates with more education, and with humanities and social science (HASS) rather than business or tech fields, the effect is weak and irregular.

To me the most interesting thing about the article was the authors' complaints about the difficulty of measuring these alleged effects. The one they found easiest to measure, relativism, turns out to have flipped ideologically since the 1960s, leaving them unsure how it relates to whether college makes students more liberal. They write about "victimhood culture," which is one of the most prominent culture war issues right now, but say nobody has been able to define it rigorously or figure out a way to measure it.

Which raises the question of to what extent these conflicts are as much about identity and personal style as they are about underlying ideology, and how deep their philosophical roots really run.

I think it's been clear for a long time that our political divides are about identity and not about philosophy.

I agree, but people keep insisting that it's all about deep philosophical differences over things like "freedom" and "morality." You can hardly turn on the news without seeing somebody say that "Democrats are amoral" or what have you. If you look at something like the "Flight 93 Election" essay it's all about Democrats hating the family and hating success and actively seeking a nation of criminals raised in single-parent homes. Or the reverse. As I said, the important point to me is that social scientists find it really hard to define what the right or the left believes in. Neither has any kind of consistent philosophy. I find this irritating but also in a sense comforting; hard to imagine a Civil War between people divided over bacon cheeseburgers and what constitutes critical race theory. The more revelations come out about all the ways Trump's friends tried to overturn the election the more I think, why? In defense of what, exactly?

I don't think much in politics is ever about philosophical commitments. I find most attempts to interpret political conflict in terms of rational, academic-style philosophy to be contrived and false. So I don't see the lack of philosophical depth in current American political conflict to be much of a problem. This is not to say politics is just about rationalizable self-interest. Politics is about human relations and psychology. I'm quite comfortable with this.

All that said, it looks to me like many of your posts about our current conflicts attempt to find the logical, philosophical basis of those conflicts, or interpret them in terms of some such philosophy. What else was your post about, which argued that a world run by progressives would be dominated by people like Mark Zuckerberg because it has to be, given progressives' devotion to freedom? Perhaps you were trying to point out--maybe a bit too subtly--that progressives aren't logical or philosophically consistent in their positions. Again, I don't see this as a problem. I would be quite wary of any group that was philosophically consistent or logical.