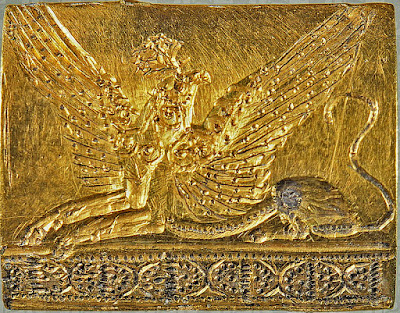 Gold seal from Pylos, Greece, depicting a griffin, c 1500 BC

Ponder how many manuscripts were lost when Europe's Protestant nations closed the monasteries and dispersed their libraries.

Interesting review of Mescaline: A Global History of the First Psychedelic by Mike Jay.

The habits that help make Tyler Cowen such a productive writer, scholar, and activist.

Ross Douthat asks why our national mood was so much worse in the 2010s than in the 2000s, when the 2000s were objectively a much worse decade.

Review of a book-length attack on modern architecture, Making Dystopia: The Strange Rise and Survival of Architectural Barbarism by James Stevens Curl.

The battle in Virginia over an attempt to legalize “duplex” houses on all residential land throughout the state.

Open-Source Psychometric Project test evaluates how masculine and feminine (yes, and) you are.

Video of two Tasmanian devils screaming at each other.

Vietnamese immigrant struggles to become his idea of an American dad.

Fifteen facts about Korea. One of them is that while the Korean birth rate has plummeted, the birth rate for married Koreans has not changed since 1985; the recent decline is entirely the result of fewer Koreans marrying.

My kind of headline: Demon with Forked Tongue Found on Clay Tablet in Library of Assyrian Exorcists
Posted by John at 7:29 AM

The ICE thing is fascinating... both for the fact that the NYT reported it at all, and how hard they are trying to backpedal on it at the same time-- "we would like you to focus on how sad this is, not on the fact that Americans really do want these jobs."

Gender quiz... as usual, I register slightly masculine. Still can't figure out if/how this is relevant to anything. Never been a "girly girl". Never felt is was a big deal. Glad I didn't grow up in the Age of Trans-- I'm happy with my not-hyper-masculine husband and my delightful sons (for whom I enjoy buying tools, so I can borrow them).