Where You Live and Where You End Up

New detailed research shows that the neighborhood you grow up in has a huge impact on  how much money you earn as an adult:


Nationwide, the variation is striking. Children raised in poor families in some neighborhoods of Memphis went on to make just $16,000 a year in their adult households; children from families of similar means living in parts of the Minneapolis suburbs ended up making four times as much.

The local disparities, however, are the most curious, and the most compelling to policymakers.

There are two adjacent neighborhoods in north Seattle with dramatic differences; children who grow up poor in Northgate earn $5,000 more a year by their mid 30s than those who grew up in adjacent, very similar-looking census tracts, even though they attend the same middle school. As to why:


The researchers believe much of this variation is driven by the neighborhoods themselves, not by differences in what brings people to live in them. The more years children spend in a good neighborhood, the greater the benefits they receive. And what matters, the researchers find, is a hyper-local setting: the environment within about half a mile of a child’s home. 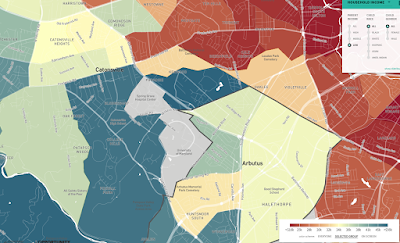 This data has been published online as the Opportunity Atlas, mapped by census tract. Here, using my own neighborhood, is a great example of the things you can do with it. Above is the map showing how much people who grew up poor in each neighborhood earned as adults. You'll need to click on it to see the scale. This is pretty much a map of how locals would assess the quality of each neighborhood. But look closely at the rectangular census tract just to the left of the word "Catonsville." 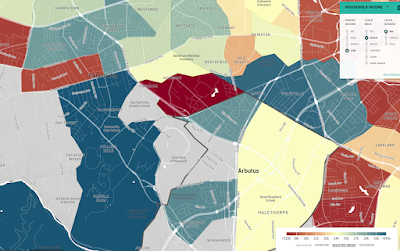 Now look at it on the map of how much black people who grew up poor in each neighborhood earn as adults.That census tract transforms from a pretty good place to grow up to a bad one. 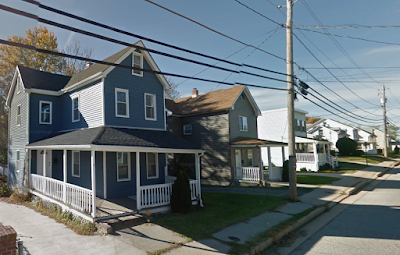 You have to be careful about these maps because of the scale. In some census tracts there will be so few children of one ethnicity or another that a couple of successful or drop-out kids could badly skew the result. But it's still fascinating to play with and ponder.
Posted by John at 8:36 AM

That's fascinating, but I see what you mean about skewing results. I was using it to poke around my hometown, and the metadata is about what you'd expect, if you know the neighborhoods. But if you narrow it down to, say, low-income white males living in (insert poor, crime-ridden black neighborhood), it makes it look like a great place to grow up! I'm guessing it's because there are so very few white people in that neighborhood at all, that the data is funky. Outcomes for everyone else in that neighborhood are as dismal as you'd expect.

Not all neighborhoods are made equal, is the thing.

I've been in astoundingly wealthy neighborhoods that were the most inconvenient, isolating, unliveable environments you can imagine; and I've also been in dirt poor neighborhoods where everybody knew everyone else, and anything you might conceivably need access to was within easy reach and short walking distance. More money in a neighborhood sounds great in theory, but it ultimately means absolutely nothing if it doesn't contribute to better local amenities.