What Happened to Mohammed Morsi? 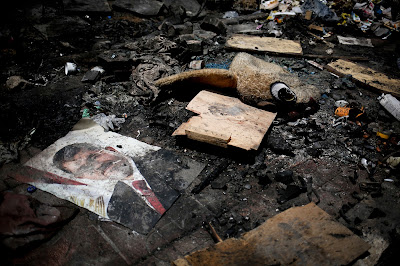 Ever since Egyptian president Mohammed Morsi was overthrown in 2013 I have been wondering what happened to him. Yes, he was from the Muslim Brotherhood, but he won the election; how could the Obama administration, after making so many public commitments to democracy in the Arab world, have turned so quickly against the only Egyptian leader ever chosen in a free election?

Now Times reporter David Kirkpatrick, who was their Cairo bureau chief at the time, has come out with an article that offers some context. First, it turned out that within Egypt, the people whose streeet protests led to the fall of the military regime and the holding of that fateful election were not really interested in democracy. What they wanted was a country more like Europe: more personal freedom, more equality for women, a freer and richer economy. When they got the Muslim brotherhood instead most of them decided to turn against the election and start calling for another military intervention.

There were also big divisions within the Obama administration over how to react:


“The people who wanted to have a different kind of relationship with the Egyptian people, including the president, were on an island in our own government,” Ben Rhodes, Mr. Obama’s deputy national security adviser, later told me. “There was a sense of inevitability about the military resuming control.”

The American military were especially leary, since they spent a lot of time working with Middle Easterners – Saudis, Kuwaitis, Israelis, the Egyptian military – who regarded the Muslim Brotherhood as just another ally of al Qaeda and a terrible danger to peace in the region. But not just the military:


Civilians in government were skeptical, too. Secretary of State John Kerry had grown close to many of the most fiercely anti-Islamist Persian Gulf royals during his decades in the Senate, even sometimes yachting with them. He had always distrusted the Brotherhood, he told me years later. When he visited Cairo for the first time as secretary of state in March 2013, he took an immediate dislike to Mr. Morsi.

“He is the dumbest cluck I ever met,” Mr. Kerry told his chief of staff as they left the presidential palace. “This isn’t going to work. These guys are wacko.”

Mr. Kerry got along better in his one-on-one meeting with Gen. Abdel Fattah el-Sisi. A former military intelligence chief, General Sisi had vaulted himself into the job of defense minister in a shake-up just a few months before.

“I will not let my country go down the drain,” General Sisi told Mr. Kerry, as he later recalled to me. He knew then that “Morsi was cooked.” General Sisi was prepared to intervene. Mr. Kerry felt partly relieved, he told me.

“It was reassuring that Egypt would not fall into a civil war or a complete massacre of the public or an implosion,” Mr. Kerry said, although he added, “I did not sit back and think, ‘Great, our problems are going to be solved.’”

Obama spoke to Morsi and urged him to make some dramatic gesture to his opposition, reminding him that Nelson Mandela made one of his own prison guards head of his presidential security detail.

But Morsi would not or could not reach out to his opposition, so hardliners within the US government eventually got their way and we ended up endorsing the coup against him.

It's a sad tale. But it also makes me wonder: could a different man, in Morsi's position, have made those bold gestures, brought some of his opponents into his administration and engineered a different outcome? Or was Morsi simply in an impossible position, unable to make any concessions without alienating his own key supporters?

Are the divisions within Egypt simply too raw and deep to be bridged within a democratic system, or would it have been possible with the right inspired leadership?

How much difference can one person make in a nation's history?
Posted by John at 8:50 AM

I've just finished listening to Robert Worth's Rage for Order. For what it's worth, his take is that Morsi's personality (stubborn, taciturn) certainly made the situation worse, but that the divisions in the anti-Mubarak revolution were there from the first, and deep. Both sides were ultimately more devoted to their own visions of Egypt than to democracy. He focuses his chapters on an amiable doctor, sort of the Mister Rogers of Egypt, who originally joined the Muslim Brotherhood not because he was a religion-obsessed fundamentalist, but because they were the only ones who seemed concerned about Egypt's poor. In the course of events, he sets up a clinic in Tahrir Square to treat victims of Mubarak's thugs, and is universally beloved. But once Mubarak is gone, it becomes clear how different and incompatible the secularists' and the Brothers' visions are, and he starts sounding and acting and even thinking more and more, yes, like someone from al-Qaeda. In one speech he tells Egypt's secularists that they are letting themselves be controlled by Israeli and American spies who want to destroy Islam.

I think democracy can happen without violence essentially only when large numbers of a country's citizens are not divided by the deepest, most essential issues of culture, morality, and identity.

Worth also shows that Morsi had unilaterally altered the constitution to increase his own power. The picture seems to be that Morsi did this, not out of personal ambition, but out of desire to give the Brotherhood a greater ability to alter Egypt to its liking. My memory is that the constitution had been written precisely to keep both sides from changing Egypt too much to suit their own vision. In other words, perhaps the sanctity of constitutions that limit winners' power to change things is just as, or more, vital to democracy as respecting electoral outcomes.

I always suspected that Morsi must have said something crazy about Israeli spies to some senior American, but the Times doesn't mention any such case.

Egypt certainly needed a new constitution, since the old one just upheld the dictatrorship. But I remember thinking that Morsi's constitution was a fatal error, in that he refused to make even symbolic concessions to his opponents. I thought he should have left things like the role of Islam more vague and relied on his electoral majority to pass pro-religion laws instead. But he would not back down.

One of the big constitutional issues in Egypt concerned the courts, which remained in place from the previous regime. They gave Morsi so much grief that he eventually declared that they could not review his decisions. This claim, eventually withdrawn, made some sense in that the judges really were old regime holdovers dedicated to blocking the Muslim Brotherhood, but I'm sure it looked very bad to opponents.

I suspect it is true that binding together a state with such deep divisions would have been very, very difficult, but I am not willing to say it was impossible.

Does Worth say anything about Egypt's likely future? My sense is that the outlook is worse than it was before the uprising, which was sparked because things were already so bad.

Worth doesn't say much about the future, but the implications of his presentation are bleak. My basic takeaway--which, of course, confirmed my view going in, so there's probably some confirmation bias here--is that, while Morsi's way of doing things didn't help, basically the secularists and the Islamists understand each other all too well. The Islamists really want pro-religion laws, and the secularists really don't, and never the twain shall meet. So when Morsi said the judges couldn't review his decisions, it wasn't so much that it *looked* bad to his opponents, as that it *was* bad for them. No judicial review would make it easier for him to do what his voters wanted him to do, and which they, the secularists, don't want. So secularists in their millions cheered, quite literally, when the army moved in, just as the Islamists rejoice when Coptic churches and tourist buses get bombed.

He talks about several countries, and Tunisia is the one semi-bright spot, as it is in many folks' analysis. But Worth depicts Tunisia's secret as entirely down to the forbearance of the Islamist leader, which has meant that, well, so far the Islamists have basically gotten nothing--but as soon as they get more than nothing, civil war will be inevitable. So he left me with the feeling that Tunisia's comity is a matter of borrowed time.