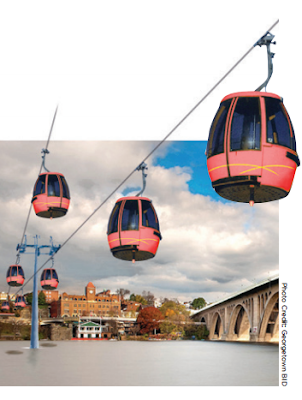 Business leaders in Washington, DC's Georgetown neighborhood want more public transit. For complicated reasons I was just perusing the Georgetown 2028 15-Year Action Plan, and I was intrigued by the notion of a gondola line to carry people across the Potomac from Georgetown to the Metro station in Roslyn.

Because, see, that is the closest station to the Georgetown business district. Some of the early versions of the plan for the city's Metro, back in the 1960s, had stations in Georgetown, but after opposition from some residents and a frank look at what it would cost to bore through the granite bedrock, that plan was abandoned. 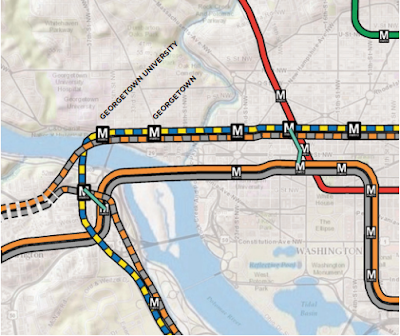 What the Greater Georgetown folks really want is a Metro Station or two, and they endorse Metro's plan to make that happen by building the new tunnel shown in stripes above. 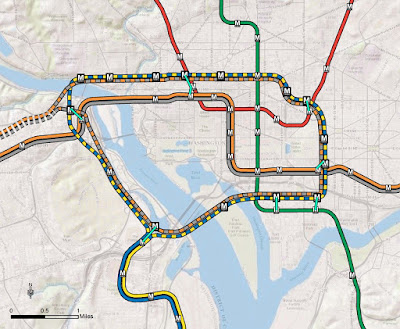 Those stations are part of a plan that Metro came up with a few years ago. But when the initial cost estimate for just the L'Enfant Plaza to Georgetown tunnel came in a $6 billion, they shoved the whole thing into their 2040 plan, i.e., far enough away that nobody can fault the current management for not making it happen. Since Metro has trouble coming up with money to maintain the tracks and stations it has, a new investment of that magnitude seems unlikely.

Which brings us back to gondolas. Gondolas cost a lot less than subways, and a two-stop system can carry up to 7,000 people per hour. Plenty of cities use them. So unless Bernie Sanders gets his revolution, this may be the best available option.
Posted by John at 6:21 AM

D.C. already has a mass transit system, and while Metro may not service Georgetown the bus system does. Now we want to fund this other thing that only has two stops? Another start-up cost. Another budget. A different type of expertise. Why can't people use the bus. Add more busses if that's the problem.

How do these gondolas fare in storms? I know Europe has a fondness for this mode of transit, but they don't really have weather comparable to the regular Nor'easters that you see in the New England region.

The problem of buses is interesting. In many American cities they are so strongly associated with poor black people that many whites and middle-class blacks just won't ride them. They are radically uncool. Thus cities are always trying to come up with ways to make buses cooler, like attaching them to overhead wires and calling them "street cars." One of the urbanist bloggers I read had a long rant a few years ago against DC's streetcar plan, saying that it was just spending several million dollars to make buses less flexible. But so long as many people simply won't ride buses, what are cities supposed to do? I remember a post from that same DC ubanist saying that some of his young, hip friends live in DC and don't own cars but have absolutely no idea how to ride the bus.