The Hanging Gardens of Babylon? Or Nineveh? 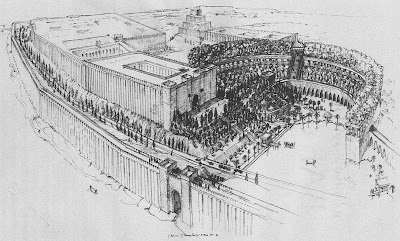 If you made a list of the most famous lists, surely the Seven Wonders of the World would be on it. It is not easy to explain to enduring fascination of these "wonders," since most of them vanished a long time ago. Maybe that we have to imagine them is part of their appeal. And how much do we really know about them? The Greeks and Romans who compiled various versions of this list liked to exaggerate how much they knew about their wonders; at least one man who was born after the Colossus of Rhodes had already been destroyed avowed that he had seen it with his own eyes. So there has always been some doubt about the facts behind these compendiums of marvels. The doubts cluster most densely around the most exotic wonder: the Hanging Gardens of Babylon. What were they, who built them, where were they -- not all of the surviving lists say Babylon -- and what was wonderful about them?

When archaeologists began digging at Babylon in the late 1800s, they naturally hoped to find the remains of the gardens and answer some of these questions. Despite decades of searching, they never did. The Babylon of Nebuchadnezzar has been thoroughly explored as these things go, to no avail. Various structures were sometimes proposed as possible garden foundations, but these notions were not convincing even to those who advanced them. Not only that, but one thing that has been found in abundance from ancient Mesopotamia is inscriptions in which kings boasted about their achievements in two areas: war and building. Every halfway famous king left us a detailed record of all his major construction projects. Nobody has found any record of a great garden built at Babylon. The very long and grand boast of Nebuchadnezzar the Great has survived in two complete versions and many partial ones, none of which mention gardens. In one of my favorite unclassifiable books, The Seven Wonders of the World, John and Elizabeth Romer called the Hanging Gardens the most "insubstantial and elusive" of the wonders, for "there never was such a thing in Babylon." 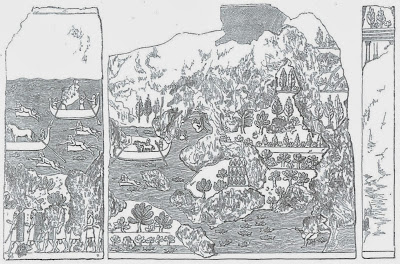 This brings me to The Mystery of the Hanging Gardens of Babylon by British archaeologist Stephanie Dalley (2013). Reviewing all of the Babylonian evidence, Dalley also concludes that there can't ever have been famous hanging gardens in that city. Instead of suggesting that the gardens were a myth, she argues that they did exist, but not in Babylon. She thinks the garden that came to be remembered as a wonder was in Nineveh, built by the Assyrian king Sennacherib around 700 BCE. Her case is quite strong. After all, Sennacherib's boast about his achievements also survives, and it does include the building of a magnificent garden. Part of the Greek account of the Hanging Gardens is that they were built to resemble the mountains of the north, to soothe a homesick queen. No Babylonian king ever said such a thing, but the Assyrians absolutely did build gardens to resemble mountain scenery: "a garden like Mount Amanus," said Sennacherib of his work. One detail contained in some of the classical accounts in that the Hanging Gardens included trees growing on top of columned porticoes; look carefully in the top right corner of the damaged relief carving shown above, which Sennacherib put in another part of his palace, and you see a tree growing on top of a columned portico. Point for point, Sennacherib's garden matches up better with the classical "hanging gardens" than we have any right to expect. Dalley's vision of Sennacherib's garden is shown in the picture at the top of the post, as reconstructed by Terry Ball. As to why most of the classical authors put the gardens in Babylon, well, classical authors got Babylon and Assyria confused in lots of other ways, such as putting the Assyrian queen Semiramis in Babylon -- some accounts even make her the builder of the Hanging Gardens. I think the evidence against a "hanging garden" in Babylon is so strong that this is the only way to root the "wonder" in soil rather than myth.

There is much else in Dalley's book besides. The Seven Wonders were all technically marvelous as well as visually impressive, including the Hanging Gardens, and Dalley gives a long discussion of Assyrian technology. The planting of trees on top of great buildings was part of the marvel, but there was also the watering system. Several authorities mention "screws," and Diodorus Siculus in particular insisted that the mechanisms that drew up the water could not be seen. Dalley interpreted these accounts and some very obscure boasts of Sennacherib to mean that the water employed banks of "Archimedes" screws -- which, by the way, almost certainly existed many centuries before Archimedes. This part is not entirely convincing, but it is certainly possible, and as Dalley shows the Assyrian kings did devote a lot of attention to moving water around.

So, a fascinating book, and I am converted. I am sad to report, though, that reading it was a grim slog. Dalley belongs to what I call the Hiram Bingham school of archaeological writing, after the man who managed to write a dismal, boring book about discovering Machu Picchu. If you are really curious, my advice is to first read the Hanging Gardens chapter in the Romers' wonderful book, then skim through Dalley's text for the key parts of the argument. Trust me, you won't miss much.
Posted by John at 7:35 PM

My theory is that the hanging garden was in Nineveh and all the dynamic part of watering was done by slaves. I suppose Prophet Jonah visited the garden for prophesying. My novel about Jonah includes the details of the hanging garden. Hope you will give a look at my book. It's free now
http://www.amazon.com/gp/product/B017IECZ6M?*Version*=1&*entries*=0