The Strange Symbolism of Botticelli's Primavera 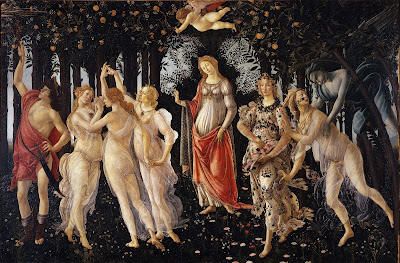 Botticelli's Primavera -- Spring -- is one of the most famous paintings of the Renaissance. Its fame rests not just on its visual appeal but on the tangled story behind it and its unfathomable symbolism. Interpretations have proliferated to the point that many art historians have simply given up and tell their students to just appreciate the painting for what it is instead of delving into its hidden secrets, real or imagined. 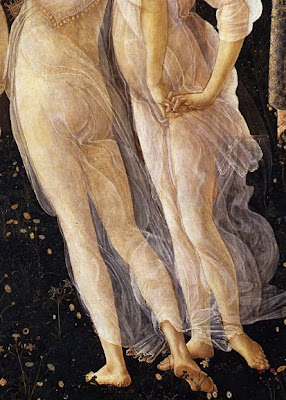 All that is known for certain is that the painting was presented to the 19-year-old Lorenzo di Pierfrancesco d'Medici in 1482, as a wedding present. The identity of the giver was kept secret at the time, but Florentines assumed it was Lorenzo il Magnifico, cousin of the young Lorenzo. Rumor had it that the groom was unhappy with his match, to Semiramide degli Appiani (what a name!), and since Lorenzo had arranged the match it makes sense that he would have given his cousin this lavish gift as a way to smooth over these troubles. Besides, Lorenzo was Botticelli's main patron at the time. In some way, then, the picture celebrates marriage; but how?

Who are the puzzling figures who populate the painting? Let's start with those whose identity is fairly certain. On the far left is Mercury or Hermes, identified by the wings on his boots and the caduceus he uses to drive away the clouds. His face is said to have been a portrait of various Medicis, living or dead, but there is no agreement about which one. Some of the obscure Latin poetry written in Florence at the time seems to equate Lorenzo the Magnificent with Mercury; this is certainly not a portrait of the famously plain il Magnifico, but some think the allusion is significant. 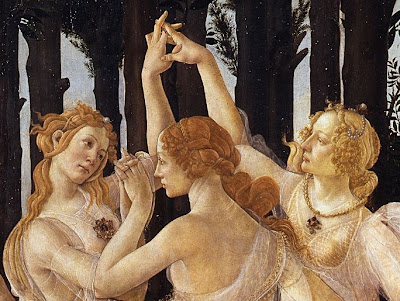 Next to Hermes are the Three Graces, painted by Boticelli with his usual ethereal, somewhat sinuous interpretation of beauty. Their presence in a wedding scene seems easy enough to understand, modeling proper behavior for the young bride. But their badges, hair, etc. have been interpreted as symbolic of all sorts of things. 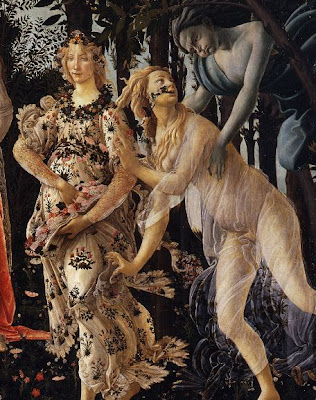 On the right are three figures that together tell a story from Ovid's Metamorphoses. The rather sinister winged being is Zephyr, the West Wind. In the story he pursued Chloris, the nymph of fields, and raped her. She was transformed by his touch into Flora, the personification of flowers. Zephyr then repented of his hasty assault and married Flora properly, and they had many children together. 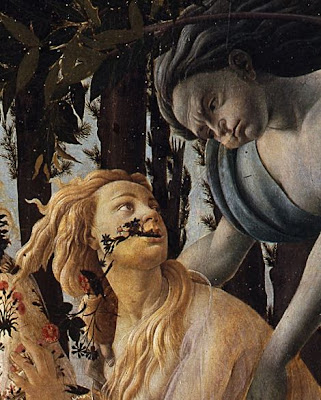 Botticelli shows flowers spilling from the mouth of Chloris, which then blend into the flowers on the dress of Flora, standing beside her. In its most obvious sense the story symbolizes spring, with the warm breeze bringing flowers to the meadows. There is also a sexual theme, the touch of the male wind bringing fruitfulness and beauty to the wintry fields. But stories like this may have much deeper philosophical meanings, and many intellectuals in both ancient times and the Renaissance were fascinated by the theme of transformation and change that runs through them. We moderns have many scientific and historical models that we use when we want to understand the world as change -- evolution, the progress from hunter gatherers to astronauts, etc. But pre-modern people lived in a much more static world, and their philosophies tended to emphasize either permanence or predictable cycles of change. Interest in a world of ceaseless transformation tended to be expressed in mystical terms. Hence, I think, the 2000-year fascination with Ovid's strange stories. 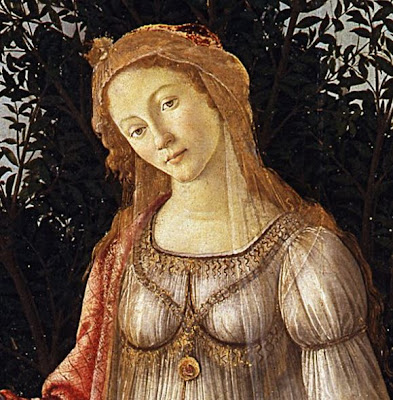 The most controversial figure is the one in the center. The presence of Eros with his arrows would seem to identify this as Venus, or simply Love. Yet as painted here she looks more like the Virgin. One of Botticelli's acquaintances in Florence was the intellectual Marsilio Ficino, who was both friend to Lorenzo the Magnificent and tutor to the young Lorenzo whose wedding this painting celebrates. Ficino was fond of writing long, metaphor-drenched sentences in which he equated love with God, humanity, learning, forgiveness, the Virgin, and much else besides. Hence various art historians (German, mostly) have interpreted the painting as an allegory of humanist learning; one even suggested that Zephyr represents knowledge of Greek, which causes learning to flower in the sterile fields of scholastic philosophy. Others want this to be a Christian religious allegory, or a lesson about statecraft. Many parts of the image can be interpreted as parts of Medici family lore; for example, the oranges may represent the three balls that decorated the Medici coat of arms, and the laurel trees on the right were associated by them with the name Lorenzo.