While he was working as a military architect, repairing and modernizing castles for Cesare Borgia, Leonardo da Vinci sketched in his notebook a design for a radically new kind of fortress. 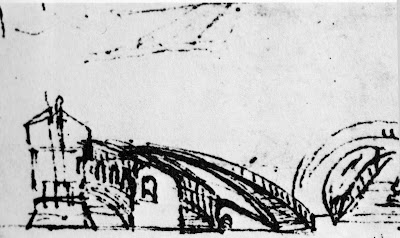 In Leonardo's day cannon were already powerful enough to demand changes in the design of forts, but by and large the new castles of the day still looked much like medieval ones. 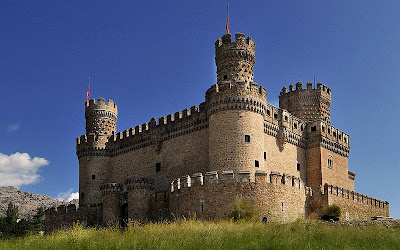 This is Manzanares el Real, a Spanish fortress constructed beginning in 1475. The rounded outline was intended to make the walls less vulnerable to cannon fire, and there are cannon ports, but otherwise it looks quite traditional.

Extrapolating from the changes taking place around him, Leonardo looked into a future in which cannons were much more deadly and a fortress would have to become something quite different. 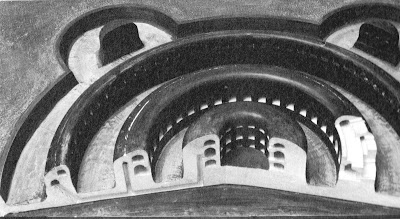 Curators at the National Museum of Science and Technology in Milan built a model based on Leonardo's sketches, which you can see above.

Look at this model from the side, and you see something from World War I.

Sometimes the hype about Leonardo's genius gets annoying, but here you can see him really reaching into the future and imagining something that no one had ever seen before.
Posted by John at 7:57 PM

I confess I remain skeptical. Cannon were already pretty effective siege weapons by the early fifteenth century, and the bastion design--with low walls of earth and brick that could withstand cannon better than the high stone walls of the pre-gunpowder era--was already well along by the time Leonardo came around. Gillingham has some good stuff on bastions in his War of the Roses book (his point being that bastions were NOT built in England because England was actually very peaceful during the period, with only brief periods of fighting resolved by battles, rather than the dragged-out wars of sieges they fought on the continent, where towns spent fortunes replacing their medieval walls with bastions).

The most obvious feature of the classic bastion is the projecting, arrow-shaped gun platforms, which were designed to cover the dead zones at the base of the broad bastion walls. In fact, since Leonardo's design seems to leave wide dead zones not covered by crossfire, I wonder if his design is more fanciful than practical.

Most of the things sketched in Leonardo's notebooks are completely impractical. In them he was playing with ideas as often as planning things he might actually build. (In fact he never built a fortress from scratch, just oversaw the updating of some old castles.) You must admit that Leonardo's fortress looks strikingly modern. I think it looks modern because he extrapolated the move toward a low, streamlined profile beyond where anyone in his time had taken it.

It does look modern, like all bastions, since a low, streamlined profile was part of the point of a bastion. It's just not clear to me that he was taking it beyond where others had already taken the bastion.

Perhaps it looks especially modern because it's not defending anything (i. e., there is no town or castle inside).

Hi there!
I'm actually looking for additional details on this particular sketch by Leonardo. Is anybody able to provide any useful info?
Thanks a lot!

According to my source, this drawing comes from the Codex Atlanticus, folio 48 recto-b, made while he was overseeing the renovation of a fortress at Piombino in 1504.