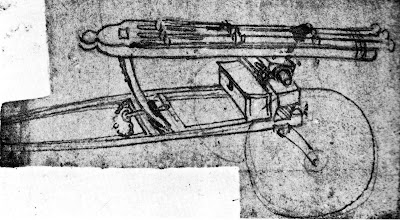 Leonardo da Vinci spent a good part of his career working as a military engineer, for a while in the service of Cesare Borgia. He made many designs for innovative military machines, fortresses, and weapons, most of which were never built. One intriguing design was for a cannon with three barrels. Compared to most cannon of his time, this design was lighter and had much larger wheels, making it more maneuverable. Gears allowed it to be raised and lowered to obtain the correct angle of fire, and the triple barrel allowed it to still deliver some punch against enemies. Leonardo sketched several versions of this gun in his notebooks, one of which is shown above. 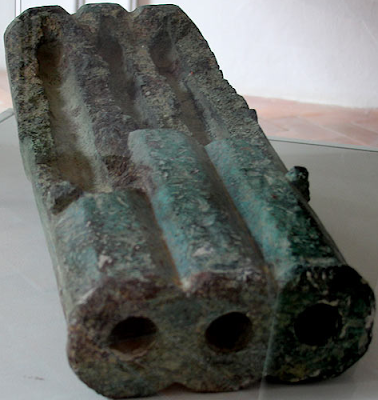 Now a bronze, three-barrelled cannon dating to the late 15th century has been found in the 15th century Klicevica fortress in Croatia, and local curators think it may have been made to Leonardo's design. In Leonardo's time the area belonged to Venice, and the fortress was built for defense against the Turks. The gun seems to have blown up while it was being fired which, if nothing else, confirms that it was fired at least once.

The cannon was actually found in 1968 and given to the museum at Benkovac in the 1990s, but because of the Yugoslav war and other problems it was not properly studied until recently. Marin Curkovic, curator of the Benkovac museum, recently said,

We cannot say with 100 per cent certainty that it was built to Leonardo da Vinci’s designs but the resemblance to his sketches is remarkable. We think there is a very high probability that it was manufactured to his designs.

Obviously the cannon does not look exactly like the one in the sketch I found, but as I said there are other sketches. So I won't comment on how good the match is. I would note, though, that Leonardo was not the only inventive engineer in fifteenth-century Italy, and Venice had its own innovators whose names and designs have mostly been lost. This is certainly a fascinating find, whoever designed it, a concrete representation of the the creativity of Renaissance Italy.
Posted by John at 8:30 PM

Leonardo may or may not have invented the "field gun"-type carriage (big wheels, etc.), but the multi-barrel gun, called a ribauldequin, had been around since the fourteenth century. Of course, you're not actually claiming Leonardo invented the design, and I suspect you know about the ribauldequin. But I thought I would mention it.