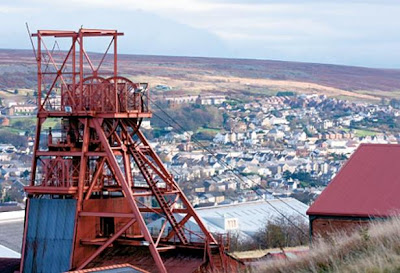 If you're tired of picturesque castles and pretty scenery, next time you're in Wales you might consider stopping by a very different sort of historic site: the industrial landscape of Blaenavon. In the nineteenth century, South Wales was a industrial powerhouse of coal, iron, and steel, and also one of the centers of the world labor movement. Blaenavon was at the heart of it. 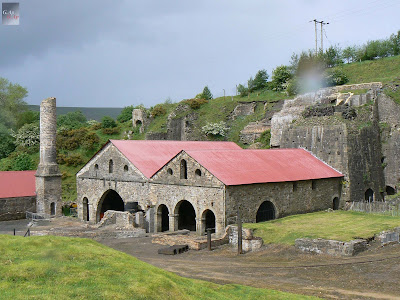 The ironworks was founded in 1788, and by 1789 there were three steam-powered blast furnaces operating at the site. (A "blast furnace" is a furnace for melting iron ore where air is forced or "blasted" through the furnace to intensify the reaction, an invention of the late Middle Ages.) 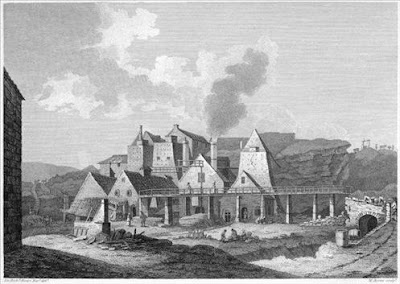 The operation was organized on the large scale of the "industrial revolution," with furnaces, forges, storage rooms, offices, and even workers' housing in one compact unit. This lithograph shows the works in 1801. By 1812 there were five furnaces capable of making 14,000 tons of iron a year. A horse-drawn railroad was built to haul the pig iron down from the mountains, and it featured a tunnel 1.5 miles (2.4 km) long. 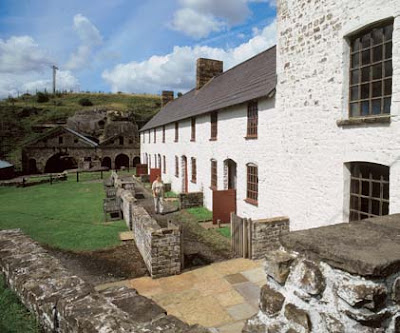 You can see in this picture how close the workers' housing was to the loud, smoky ironworks. At first almost all the workers lived in company housing, but eventually a community grew up around the site. The population of the town grew from a few dozen 1787 to 11,500 by 1891. 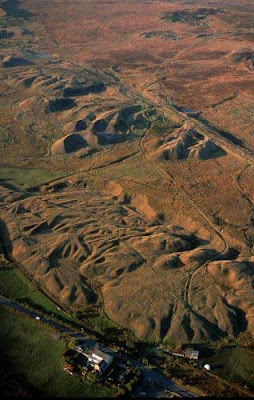 At first the iron ore came from shallow, open pit surface mines, but after 1817 deep shafts were dug. You can still see the marks mining left on the local landscape. 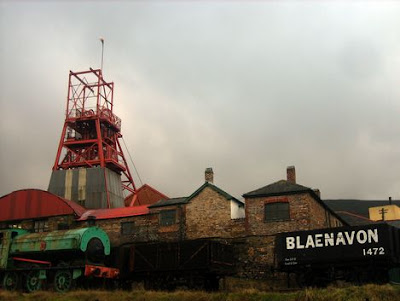 What catapulted South Wales into industrialization was the close proximity of vast deposits of iron ore, limestone and coal, along with a population of workers who had acquired their skills in the old-style ironworks. Coal mining endured in the region longer than iron-making, and the last mine at Blaenavon did not close until 1980. That became the Big Pit Museum (above), where visitors can ride underground to get a sense of what work in the tunnels was like.

The demise of these coal and iron districts has been a bittersweet thing for the people who live around them. They fouled the air and water and maimed or killed off workers at an alarming rate, and their nasty labor relations fed the angry politics of the early twentieth century. On the other hand they provided thousands of jobs that paid enough to support a family -- in 1913, 250,000 worked in the Welsh coal industry, nearly a quarter of all the adult men -- and they made their workers proud of the way they were shaping the world with muscle, sweat, and know-how. Since the iron works and the mines closed, the population of Blaenavon has fallen by more than half. Because nothing new is being built there, the old landscape is amazingly preserved, but a few jobs in the tourist industry can hardly replace the thousands lost to de-industrialization.
Posted by John at 11:44 AM

Thanks for this post on Blaenavon. I visited for a night in the late 1990s. Was making a mad dash across southern England and Wales to see some sights while on business. Went to see the Roman ruins at Caerleon and then spent an evening of socializing with some locals in Blaenavon. As a native of Western Pennsylvania, there was much familiar to me there.

For some reason, I still have the business card from the very modest inn we stayed at jammed into a coffee mug on my shelf here in the office.