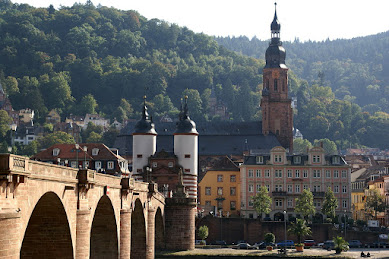 Heidelberg is an ancient university town in southwestern Germany, where memories of theological debates and student duels jostle with cutting edge research institutes. 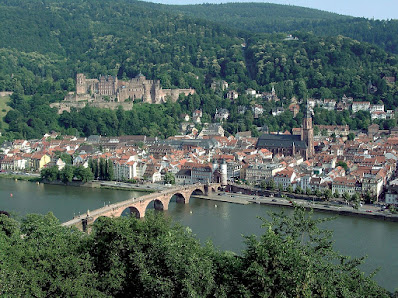 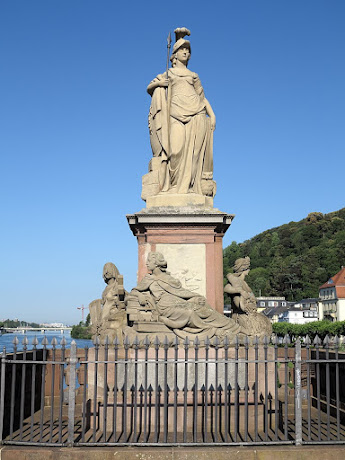 We begin our exploration by crossing the old bridge across the Neckar River, which is not actually very old by Heidelberg standards, dating to 1788. It boasts several statues, including this one of Minerva. 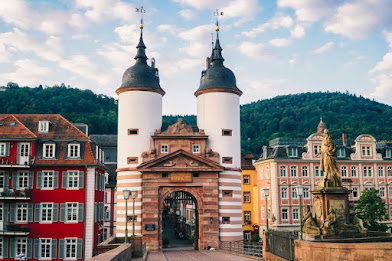 We pass through the bridge gate. 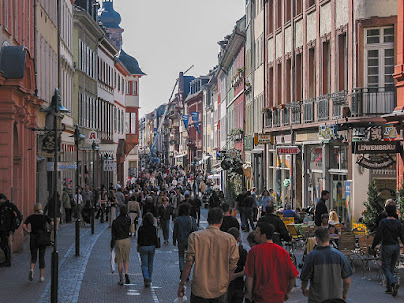 Into the old city. 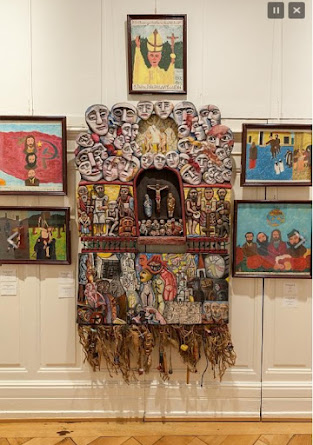 Making our way through the streets we pass an "Outsider Art" museum, Museum Haus Cajeuth, which might be interesting if we're in that sort of mood. 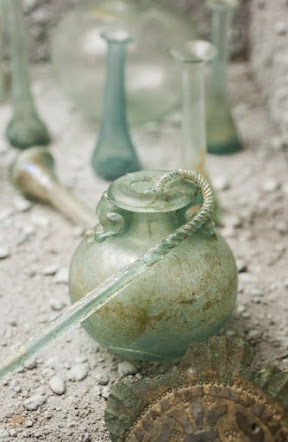 Making our way west we come to  the Kurpfälzische Museum, devoted to the history of the region. Heidelberg is an ancient settlement; a Celtic fortress stood on the hill above the modern town by 400 BC. Heidelberg means "holy mountain", and it is thought that the sacredness of the spot dates to those times; a Celtic sanctuary has been found on the nearby mountaintop. The Romans arrived in 40 AD, when a fort was built here. In 369 Emperor Velentinian I built a larger fortress and a bridge over the river. A large cemetery of that period has been excavated, producing artifacts like this Roman glass. 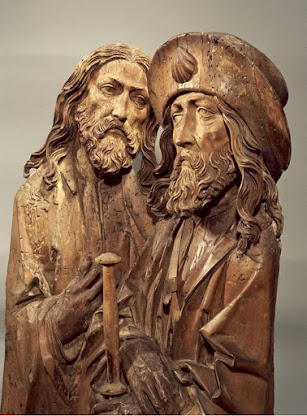 A post-Roman settlement here is mentioned in documents starting in AD 769. In 863, a monastery was built on the Heiligenberg, within the ramparts of the Celtic fortress. A town called Heidelberg is first mentioned in 1196. The museum has many medieval artifacts, as well as later works of art like this masterpiece by Tilman Reimanschneider. 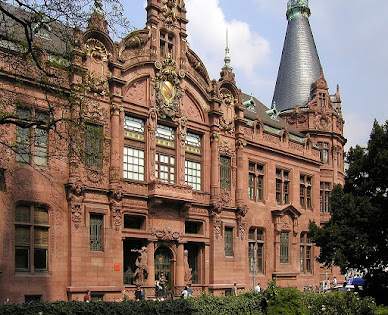 From the museum we turn back southeast toward the university, founded in 1386. Here in 1518 Martin Luther defended his 95 theses so successfully that the faculty was converted to Protestantism, and Heidelberg became one of the intellectual centers of the new faith. This is the library, completed in 1905. 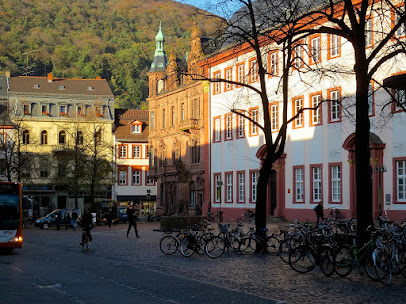 The university has long spilled beyond the boundaries of the old city, with research centers and satellite campuses across the suburbs. But much of it remains here, occupying a jumble of building of many periods. The university had fallen on hard times in the 1700s but was refounded in 1803, becoming a great center of the Romantic movement in Germany and thriving ever since. 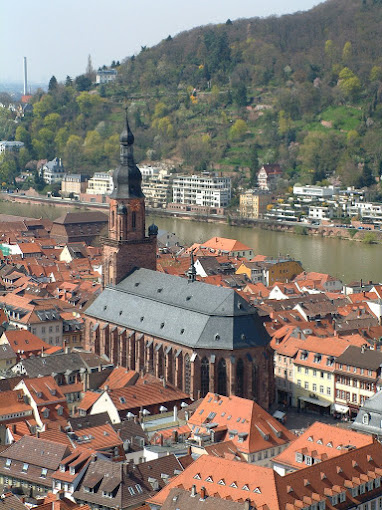 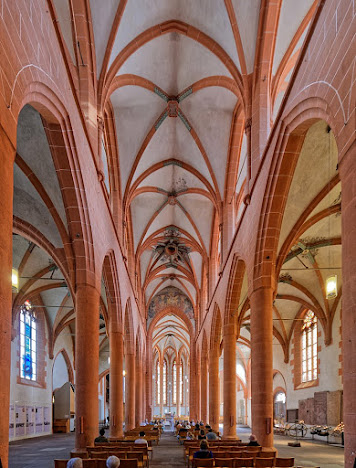 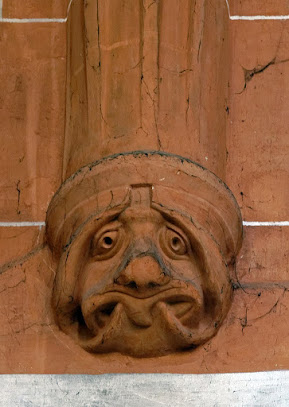 Continuing east we come to the Church of the Holy Spirit, a gothic construction built largely in the 1300s. 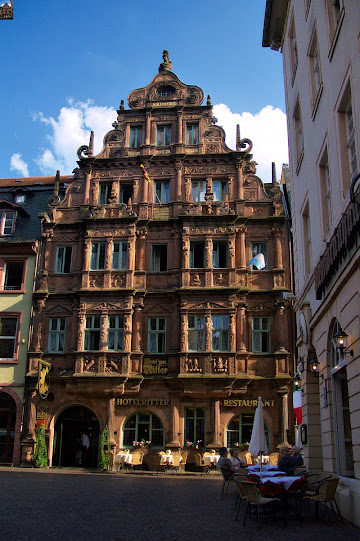 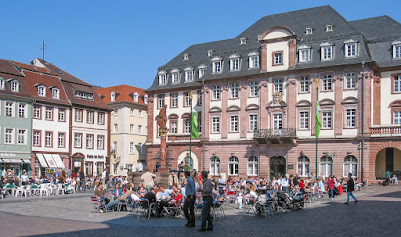 Around the cathedral are many medieval and Renaissance buildings. Directly above is the town hall. 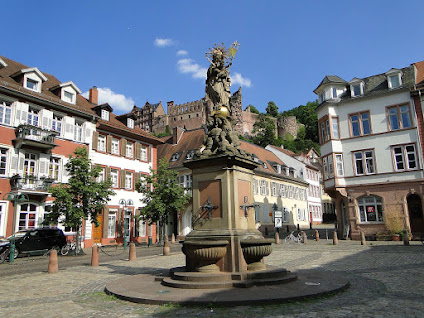 The Corn Market, with a view of our next destination, the Castle. 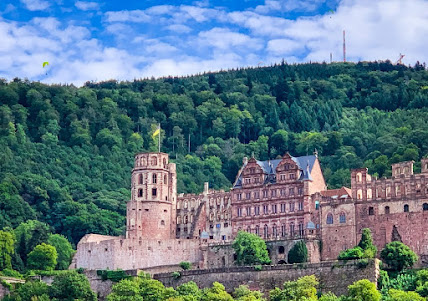 Heidelberg Castle is a mishmash of construction from many periods, beginning in the 1200s. 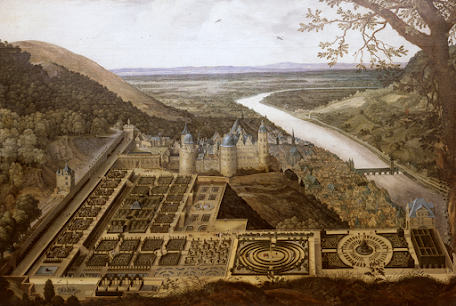 The early castle, shown here around 1600, was largely destroyed by two sieges during the 30 Years War. The first was in 1621, when the Catholic League drove out the Protestants. In 1634 the Swedes took the city back for the Protestant side, and the Austrians came to retake it. They had seized the town and were getting ready to blow up the castle's walls when a French army arrived – the Catholic French had just entered the war on the Protestant side – and chased off the Austrians. After the war the castle was rebuilt but not refortified, so it served as a ducal residence and administrative center. The castle had another moment in the sun in 1815, when the Emperor of Austria, the Emperor of Russia and the King of Prussia met there to form form the "Holy Alliance". 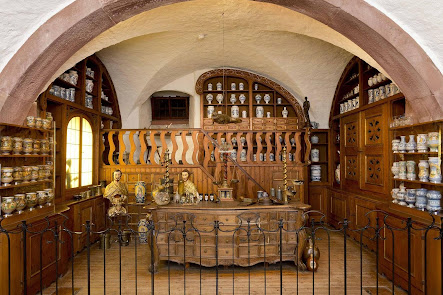 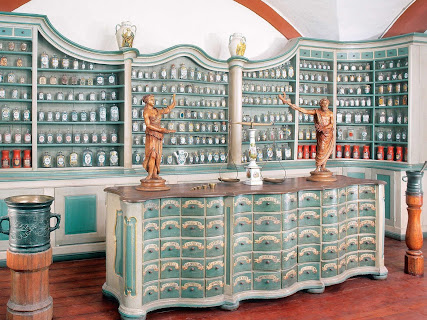 One of the many interesting things in the castle now is the Apothecary Museum, with actual apothecary's shops from the seventeenth and late eighteenth centuries. In Germany today many people still take old herbal remedies, so there is a lot of non-historical interest in the ingredients and methods interpreted here. 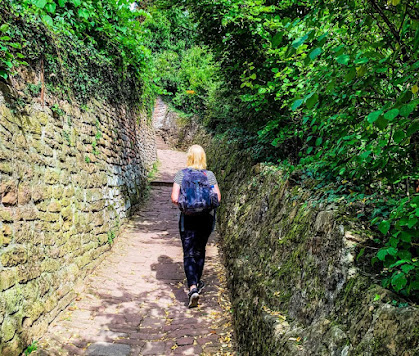 One of the best things to do in Heidelberg to to ascend the mountain behind the town to get the wonderful views. You can either walk, up a steep trail known as the Philosophers' Walk, 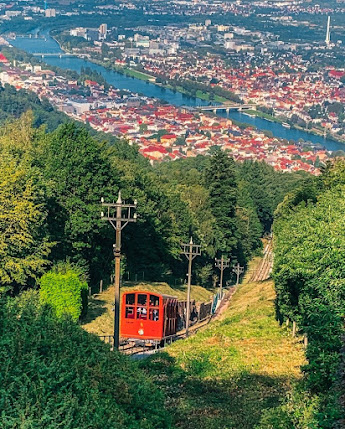 or ride the funicular railroad. 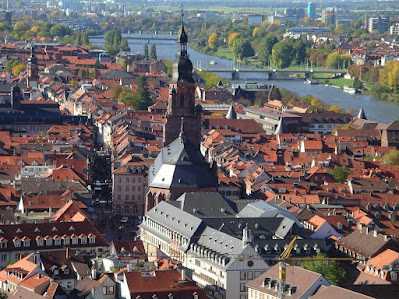 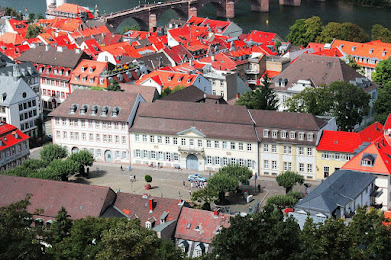 Either way you are rewarded with splendid views of this lovely city.
Posted by John at 7:33 PM

I lived there immediately after WWII until 1948 and still love the town. Thanks for sharing the pic they bring back many fond memories.