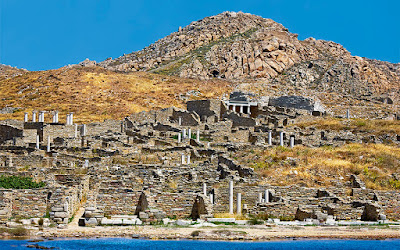 Delos, says Leto to the island in the Homeric Hymn to Delian Apollo,


if you would be willing to be the home of my son Phoebus Apollo and make him a rich temple – for no other will touch you, as you will find: and I think you will never be rich in oxen and sheep, nor bear vintage nor yet produce plants abundantly – but if you have the temple of far-shooting Apollo, all men will bring you hecatombs and gather here, and incessant savour of rich sacrifice will always arise, and you will feed those who dwell in you from the hand of strangers; for truly your own soil is not rich.

And so it came to pass. The legendary birthplace of Apollo and Artemis, to which Leto fled to escape the wrath of Hera, became one of the great religious sites of the Greek world. 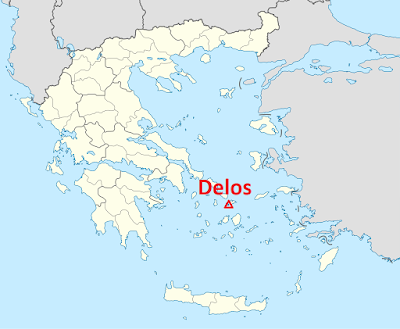 Delos is a small island in the archipelago known as the Cyclades, in the center of the Aegean Sea. By classical times there was not much to these islands, but they developed early. They throve in the Bronze Age and kept some of their wealth during the Dark Ages that came after the sack and ruin of Mycenae and Knossos. Around 800 BC, when the island sanctuary as it was known in classical times began to develop, these islands were as wealthy and cosmopolitan as anywhere Greek was spoken, and this may explain the prominence of Delian Apollo. 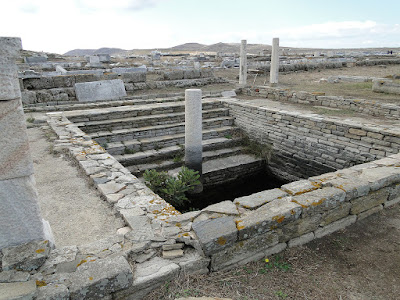 And yet Leto was right; Delos was a poor place at all times, with scant soil and less water. The sanctuary of Apollo seems to have grown up around a sacred spring that was later turned into this stone well. The conventional name of this well is "the Minoan fountain," but the stonework you see dates to 166 BC. 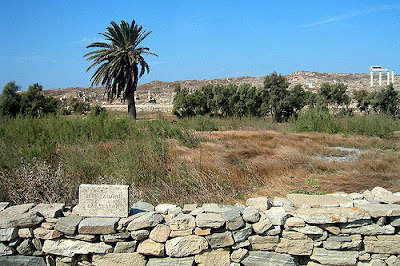 There was also in the sanctuary a small pond known as the Sacred Lake, but these days it is kept dry to discourage malarial mosquitoes. By it stood the Palm of Leto in whose shade she was supposed to have given birth. This was an important site for Classical visitors, so it pleases me to see that the modern caretakers keep a palm tree at the site. 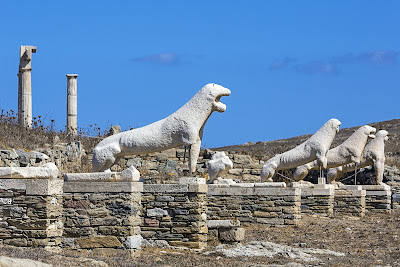 Among the famous monument of Apollo's sanctuary is the Terrace of the Lions, donated by the people of Naxos around 600 BC. Delos it seems, along with the Olympian Games and the Oracle at Delphi, was one of the nodes around which Greek consciousness arose in early Classical times.

Of the main temple of Apollo only foundations remain. We know it was considered an exemplar of the Doric order, so we can guess what it would have looked like; here is a nineteenth-century reconstruction. 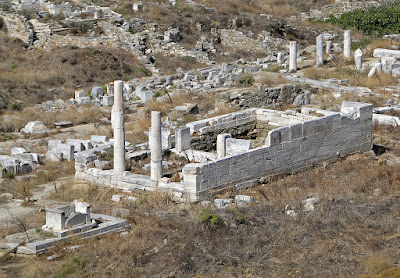 The remains of the Temple of Hera, built around 500 BC. After all the birth of Leto's children was in defiance of this great goddess, so it would not due to leave her anger unappeased. 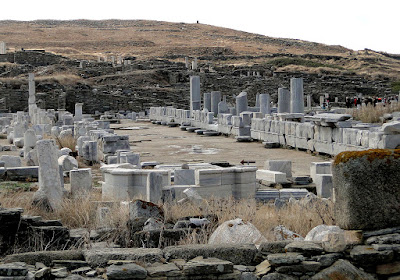 The sacred way. Because of the island's symbolic importance the Greek states vied for influence there; in the sixth century this was mainly Naxos, Paros, and Athens. In 477-478 the Delian League was formed to oppose Persia; Athens soon assumed the dominant role within the League and in 454 the treasury was moved from Delos to Athens, a move some historians take as the beginning of an Athenian Empire. 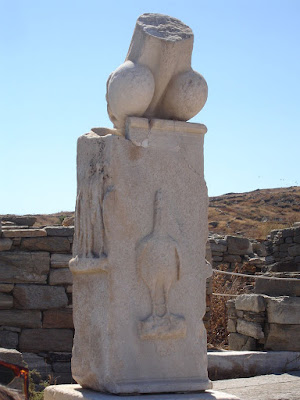 There was once a sacred precinct dedicated to Dionysus, of which the most dramatic remnant is this giant phallus. The theater. In Hellenistic times the island once again assumed a symbolic importance in the struggle of various Macedonian kings for prominence, and it was sacked at least twice. 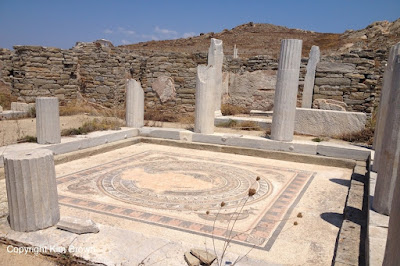 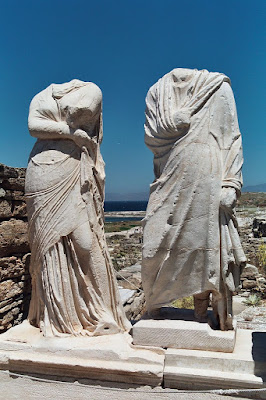 Under Roman rule it returned to its roots as a religious site and place of pilgrimage. Among the showplaces at the site today are houses dating to Roman times, decorated with splendid mosaics and statues. 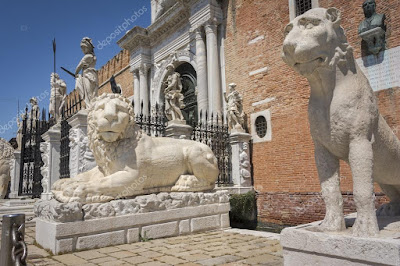 After the Fourth Crusade in 1204 the Venetians seized the island and took one of the Naxian lions back to Venice, installing it among a pride of other lions at the gate of the Arsenal. 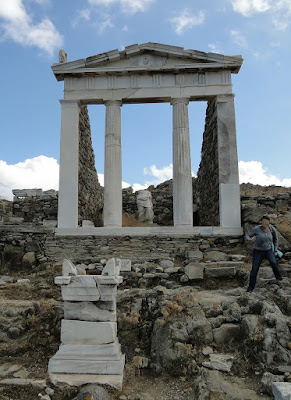 And then like the rest of the Aegean Islands Delos slowly evolved into a place of for archaeologists and tourists.
Posted by John at 10:46 AM