The Parthenon Frieze and the Sacrifice of Erechtheus

The Parthenon Frieze is one of the standard "Great Works" of western civilization, but what does it really represent? A new book by Joan Breton Connelly, The Parthenon Enigma, asks the question:


Art history and classical civilization courses tend to teach us that the frieze represents the “Panathenaic procession.” The Great Panathenaia occurred, like the Olympics, every four years; it was a festival of athletic games and poetry and music competitions, culminating in a procession to the temple of Athena, goddess of weaving, war, and wisdom. Her statue was then presented with a new peplos, a robe woven by the women of Athens.

Thus, the frieze, with its horses and horsemen, youths and elders, men and women, and animals being led to sacrifice, represents Periclean Athens and a cross-section of 5th-century Athenians. The central panel on the eastern frieze, which depicts three women of assorted heights and a man and a child handling a bundle of cloth, is read as the culmination of the festival. The tallest woman is seen to be Athena’s priestess. 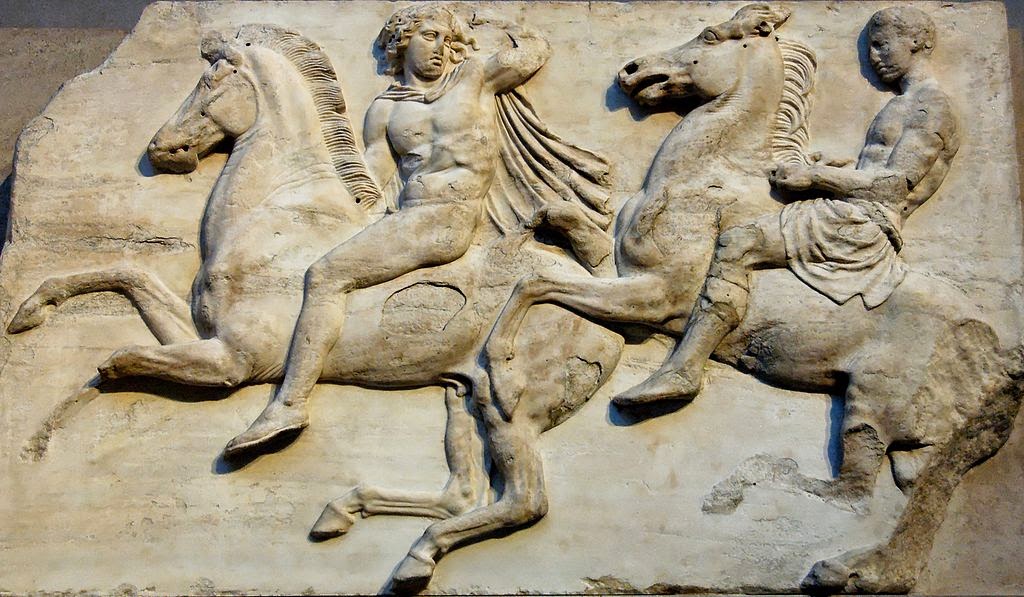 This theory, proposed by a couple of eighteenth-century tourists, has one glaring problem, which is that Greek temple art almost always depicted ancient or mythical events, not contemporary happenings. Cambridge classicist A.W. Lawrence, brother of T.E., wrote that if the frieze did depict the Panathenaia,
“this must have verged on profanation.” There are other difficulties (Wikipedia calls the interpretation “fraught with problems”):


Many of the elements we might expect to see in a typical Panathenaic procession are conspicuously missing. Why so many horses but no hoplites, the backbone of the 5th-century Athenian Army? What’s with the anachronistic chariots, a relic of Bronze Age warfare? Where is the wheeled ship-cart that transported the peplos, which was rigged to it like a sail? Why is a man handling the peplos in the climactic panel? (The peplos was woven by female hands for a virgin goddess.)

Connelly argues that this is all wrong; the frieze does depict an ancient event, the story of King Erechtheus and his daughters:


King Erechtheus sprang directly from the Attic earth. He had a wife, Praxithea, and three daughters. (The Athenian royal houses ran to daughters.) When Eumolpus, king of nearby Eleusis, threatened a siege of the city, King Erechtheus got an unpleasant oracle from Delphi: He must sacrifice one of his daughters to Athena to save the city. The queen, rather than cringing in horror at the idea, embraced it as patriotic duty. . . . Meanwhile, the three girls have vowed that if one dies, they all will—so the two who are not chosen insist either on being sacrificed as well or on killing themselves, possibly by jumping from the Acropolis. Athena then declares that the heroic girls are to be buried in a single tomb and that there should be a sanctuary and sacred rites established in their honor. . . . 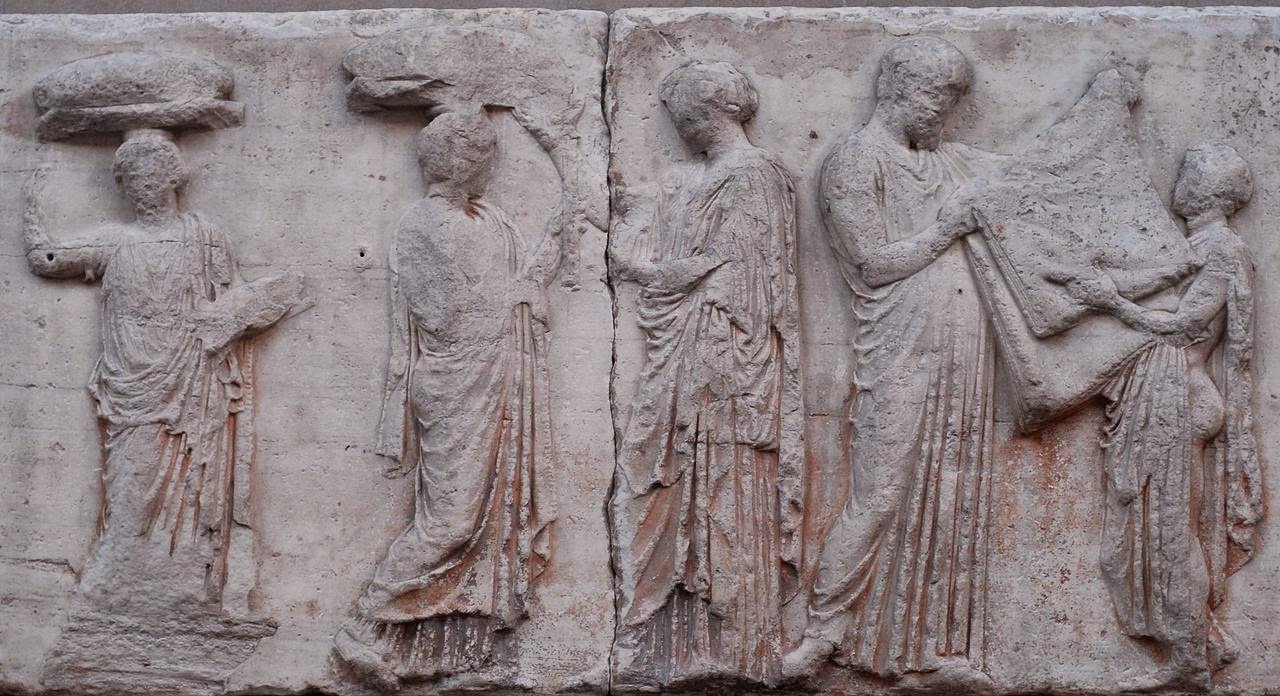 Suddenly, upon looking at the “enigmatic peplos incident” of the eastern frieze, Connelly felt that she understood it for the first time: This was a family unit—mother, father, and three daughters of different ages—the family of Erechtheus. The cloth that the father and the youngest child (who must, Connelly decides, be a girl; the gender of the semi-nude child in the frieze is a subject of debate) are handling is not the peplos but a sacrificial robe.

I like this a lot, because I have always disliked the notion that the classical Greeks were particularly calm or rational. Their religion in particular has always struck me as more hysterical than serene. But I do have to say that the child on the right above looks like a boy to me.
Posted by John at 8:23 AM