Fernando Pessoa and the Empty Self 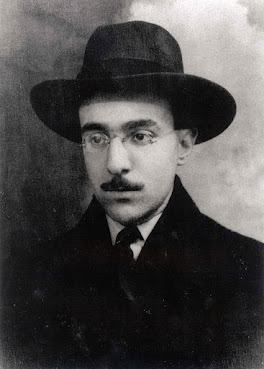 Certain modern psychologists and neuroscientists have concluded that the self is a myth. Experiments show that our hand begins to move before our mind becomes aware of formulating the desire for movement, sometimes when we feel that we have just begun to weigh up the pros and cons and movement. Rather than having a single character that remains unaltered through every vicissitude, we change kaleidoscopically in response to every alteration of circumstance. We have no pure feelings, just salad bowls where every emotion is mixed, and if the fork of the moment chances on hate or love and nothing else, that is of no real import.

Portuguese poet Fernando Pessoa (1888-1935) believed all of this. As microscopic in his self-examination as any artist who ever lived, he found at the deepest level only confusion and emptiness. Pessoa is remembered, by those who remember him at all, as a sort of prophet of modernity, a lonely, alienated soul whose work explored the limits of loneliness and alienation. He also pulled off one of the great feats of posthumous literary self-promotion. There is a new biography of Pessoa, by Richard Zenith, from which a reviewer in the Times extracts this summary of the trick:

He published a few books that went mostly unnoticed, but there were rumors of a trunk in his room stuffed with his true life’s work. After his death in 1935, the trunk was discovered, brimming with notes and jottings on calling cards and envelopes, whatever paper appeared to be handy. They were authored not only by Pessoa but by a flock of his personas (“heteronyms,” he called them): a doctor, a classicist, a bisexual poet, a monk, a lovesick teenage girl. Among his writings was a sheaf of papers that would become his masterpiece: “The Book of Disquiet,” a mock confession in sly, despairing aphorisms and false starts — “The active life has always struck me as the least comfortable of suicides.”

So most of Pessoa’s work, like much of Emily Dickinson’s, is as much a creation of the editor’s as his own. Zenith, who has translated some of Pessoa's work, says it consists of

a large but uncertain quantity of discrete, mostly undated texts left in no sequential order, such that every published edition — inevitably depending on massive editorial intervention — is necessarily untrue to the nonexistent ‘original.’

And this, you have to think, is exactly what Pessoa wanted. He did not believe that he had a true voice, which expressed an inner self, because after searching for decades for that self he concluded that there was no such thing.

“I’m beginning to know myself. I don’t exist,” he wrote. “I’m the gap between what I’d like to be and what others have made of me.” Or he was “the naked stage where various actors act out various plays.” Or, he wrote in a poem, “merely the place / Where things are thought or felt.”

In one of his poems he wrote,

We are two abysses - a well staring at the sky.

As to where his work came from, if not from himself, he was mystified:

After writing, I read —
What made me write that?
Where have I been to find that?
Where did that come to me from? It is better than me —

He believed everyone else was as complex and ultimately uncentered as he felt himself to be:

There are no norms. All people are exceptions to a rule that doesn’t exist.

Given this, he believed that communication between people was all but impossible. His most famous poem these days seems to be “Your Eyes Go Sad”:

Your eyes go sad. You're not
Listening to what I say.
They doze, dream, fade out.
Not listening. I talk away.

I tell what I've told, out of listless
Sadness, so often before ...
I think you never listened.

Pessoa did not do much in his life. He lived off his inheritance, read, wrote, sometimes hung out with other artists but had no lovers and no close friends. He probably died a virgin. He scorned busy-ness and said in a dozen different ways that thought was always preferable to action. A dilettante, he once wrote,

Everything interests me, but nothing holds me.

He also had no teachers, no role models. Obviously he was influenced by books he read and people he knew, but he felt quite alone:

I never had anyone I could call “Master”. No Christ died for me. No Buddha showed me the right path. In the depths of my dreams no Apollo or Athena appeared to me to enlighten my soul.

Pessoa's poetry has a strange diversity to it. I would probably not know a verse of his if I saw it. This is always an issue with translated writing, but clicking from one Pessoa poem to the next you really have no idea what to expect. Much of it does nothing for me; it is obscure, indirect, and has a sort of random quality. But some is nice:

To be great, be whole: nothing that's you
Should you exaggerate or exclude.
In each thing, be all. Give all you are
In the least you ever do.
The moon, because it rides so high,
Is reflected whole in each tiny pool.

The difficulty was deliberate. He once wrote,

I've always rejected being understood. To be understood is to prostitute oneself. I prefer to be taken seriously for what I'm not, remaining humanly unknown, with naturalness and all due respect.

I found what I have read this week about Pessoa fascinating because I agree that there is a prophecy in his writing. I see around me millions of people with little in the way of self, and I suspect that if people in the past seemed to have more it was because they lived in narrower cultures with more rigid expectations. Freed to be their true selves, millions of people have looked hard within their minds and found nothing: no desires, no ambitions, no passions. No firm nature, just “fluidity,” one of our age's buzzwords.

Love, for much of the current generation, is not the great pursuit or the great passion, but something impossibly distant and unreal. To be truly known by another seems either impossible, or, if possible, horrifying. I am struck by the persistent modern fantasy of going off alone to a cabin in the woods, where one could avoid the whole messy business of dealing with other humans. Pessoa:

I have no ambitions or wants.
To be a poet is no ambition of mine.
It is a way of staying alone.

Suppose it is true that, for many people, a world with too much freedom leads only to alienation and emptiness? That without strict cultural norms, there is only purposeless fluidity? That without social structures, we can hardly communicate with each other?

I know, I alone
How much it hurts, this heart
With no faith nor law
Nor melody nor thought.

Only I, only I
And none of this can I say
Because feeling is like the sky -
Seen, nothing in it to see.

It is not, I assure everyone, that I long to immerse myself in some ancient, rigid tradition, or even in Victorianism. I am sure that has its own terrors. But maybe Pessoa's self-examination showed that the great danger of life in our age emerges at the intersection of neuroscience and freedom: that freed to look inside ourselves for a purpose and a path, we might see all the way through to a nothingness beyond. But maybe Pessoa also understood, in a way, one of the solutions to this predicament, to celebrate the lives we chance to have:

Crown me with roses
And with swiftly wilting leaves.
That will do.

My usual refrain borrowed from Carl Sagan crops up once again - "As if there were only one human nature!"

Pessoa felt he had no true self? Perhaps he didn't. Perhaps some people don't. Or perhaps they do, but they think or feel that they don't - they can't recognize themselves, or they dissociate from themselves.

But I find I have no choice but to argue that I personally have a self. After all, it gets me into a fair deal of trouble, I find.

Part of the problem, perhaps, is what do people mean when they say "self"? Because I could see certain imaginings of what "self" is turning up a clear lack and leading people to assume there's no such thing as a self at all. I imagine I have very different conceptions, definitions, and expectations for what "self" is than Pessoa did, which would explain why I seem to find results where he didn't.

"Experiments show that our hand begins to move before our mind becomes aware of formulating the desire for movement, sometimes when we feel that we have just begun to weigh up the pros and cons and movement."

Then what decides to send the hand on its way towards the thing your mind belatedly decides to move it to?

"Experiments show that our hand begins to move before our mind becomes aware of formulating the desire for movement, sometimes when we feel that we have just begun to weigh up the pros and cons and movement."

To take things in a different direction, what is "awareness"?

We already know we experience the world at a slight temporal remove from reality - we are constantly living in the past in terms of sensory input, and our brains are constantly having to make complex predictions and assumptions to fill out sensory details that they lack at any given moment.

Consider the marvel of predictive powers that is the human ability to hit a fastball with a baseball bat. We begin swinging well before we have a clear picture of the flight path of the ball - we rely to a massive degree on intuition to make the connection; on pattern recognition from partial data, followed by extrapolation of likely outcomes based on past experience, and modulated and modified on the fly as new (usually fragmentary) information becomes available.

Clearly our conscious 'awareness' of things happens at a remove. Clearly there is a subconscious element that handles things like moving our hands before we're 'aware' of even wanting to - because again, we rely to a staggering degree on predictive algorithms and pattern recognition. It's not that something else is controlling us - it's that's we're just not aware of what our own bodies are doing until slightly after the process has already begun. I fail to see how that threatens the concept of a 'self' (whatever that concept may actually be, in aggregate).

I've long found the "no such things as a self" theory to be utter rubbish. As I've said before, the arguments and experiments rely on an absurdly high standard of strength and consistency in their definition of self. They seem to rely on the syllogism, "if a person responds in different ways at different times, or to different stimuli, they have no such thing as a self." The standard is simply, as I said, absurd.

John's reference to the Victorians is, I think, telling. What the argument seems to amount to is, "there is no such thing as the strong, heroic, mythic self as philosophers of the nineteenth century imagined it." Fine. IMHO, a weak self that spends as much time, or more, as observer as it does as decider, doesn't know what it wants, and changes its mind as often as it stays constant, is good enough to qualify as a self that exists.

Thank you for the kind words.

But I misused the term "syllogism"! A syllogism is not the same as an if-then statement.