Today's Place to Daydream about: Strasbourg 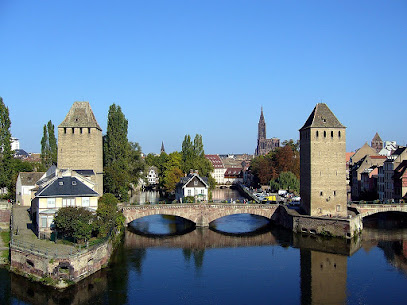 Strasbourg is an ancient city, now in eastern France but for centuries part of the German empire. It has a long and event-filled history and an array of historical buildings to go with it. One of them is the fortified medieval bridge above. 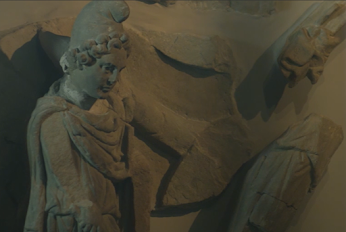 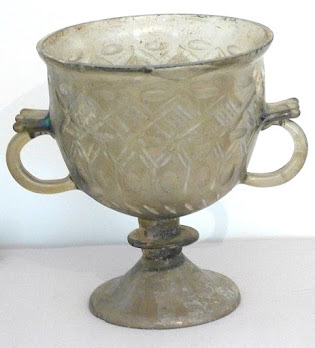 Archaeology shows that this fertile land where the Ill River meets the Rhine has been settled since Neolithic times, but the city chose to celebrate its 2,000th anniversary in 1988, commemorating its first appearance in written records as the Roman camp of Argentoratum. A battle was found near the town in 357 between future Emperor Julian and German tribesmen called the Allemanni; despite being outnumbered, the Romans won a great victory. In 451 it was conquered by Attila and his Huns. 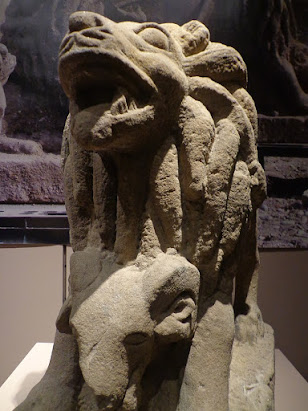 The place to experience this history is the Archaeological Museum, full of Roman artifacts. 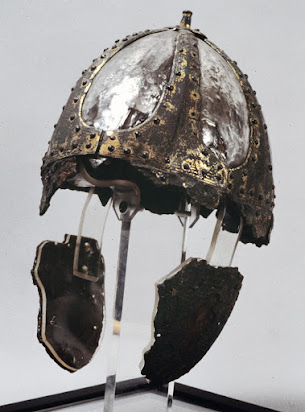 Strasbourg remained a significant place through Merovingian and Carolingian times. In 842, amidst civil war among Charlemagne's three grandsons, the two younger brothers swore the Oaths of Strasbourg, promising to work together against their older brother Lothar. This is famous partly because Louis' men swore in proto-German, Charles' in proto-French, very important early texts in both languages. When the empire was partitioned, Strasbourg ended up in the portion of the older brother Lothar, for whom the region was called Lotharingia, from which the modern provincial name Lorraine derives. 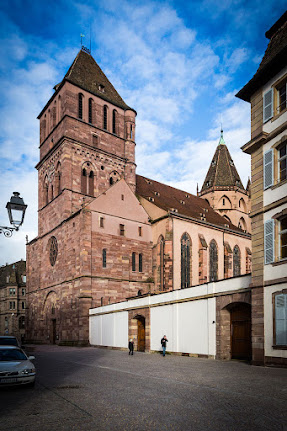 The ruler of Strasbourg across the early Middle Ages was its bishop. There were at least two armed revolts against him, but he remained in charge down to 1262. In 1260 a new, very aristocratic bishop, Walter von Geroldseck, issued a Manifesto of Grievances against the townspeople, saying they were not respecting the bishop's authority or paying him all the taxes due to him. By then the booming town had a lot more money and men than the bishop, so their response was, "come and collect your taxes if you can." Walter called for help from his fellow lords and bishops and raised an army. It was a tense, roughly equal standoff until one of the lords who had come to help the bishop, Charles of Hapsburg, decided to switch sides and support the town. (Those wily Hapsburgs, at it again.) 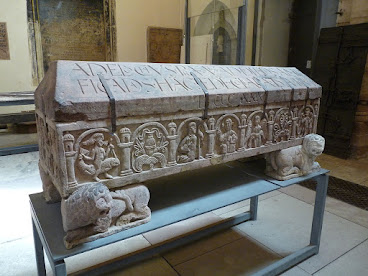 Months of raiding eventually culminated in the Battle of Hausbergen. The bishop – he was the sort of bishop who commanded his own army, in full armor – thought he had caught the forces of the town at a disadvantage and ordered an immediate cavalry charge, but he was too far away and the townsmen had time to form up properly for defense. The bishop was killed and his men were so badly routed that the new bishop had to surrender all his claims over the town, which became an Imperial Free City. 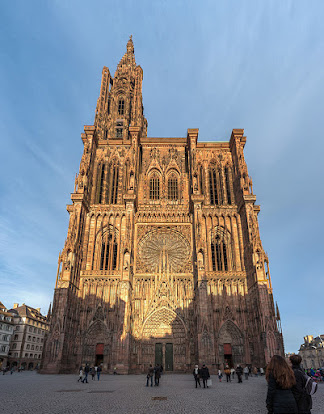 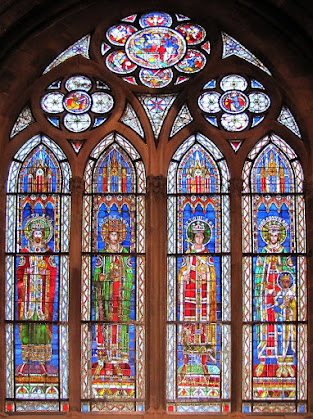 In charge of their own destiny, the town' leaders immediately began rebuilding their modest, Romanesque cathedral into the imposing gothic masterpiece we know today. This marvelous building is one of those "living" cathedrals, meaning that it had continually evolved over the centuries as pieces fell down or wore out and had to be replaced. For example the roof burned in 1870 during a Prussian siege, but then the new Emperor of Germany paid for its rebuilding. 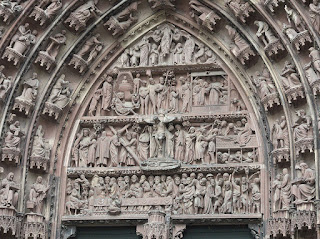 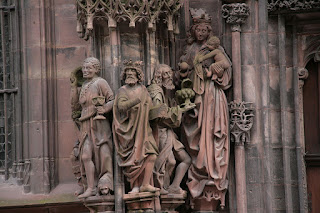 Many of the sculptures have been moved to museums during one war or another, but the reproductions you see on the building today seem to be very fine. 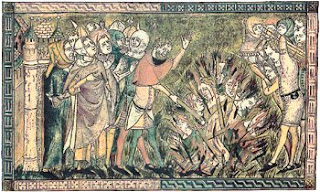 In 1348 Strasbourg experienced the Black Death, and in 1349 it experienced revolution. The townspeople wanted to slaughter the Jews in response to, as they saw it, the spreading of the plague. But the town council, dominated by the richest local businessmen, declined, and the bishop backed them. The people continued to demand punishment of the Jews. The government eventually arrested some Jews and had them publicly tortured, but they did not confess to plague-spreading. See, said, the authorities, we have investigated these rumors and found nothing. Not at all satisfied, a populist faction revolted and seized power, driving several councilmen into exile. Once in power they killed all the Jews they could get their hands on. 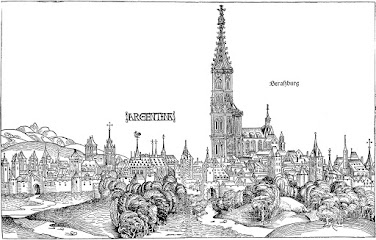 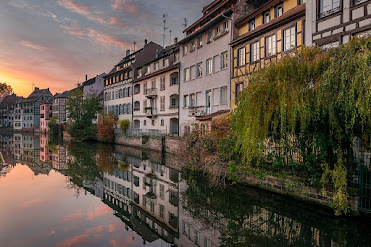 The plague devastated Strasbourg like the rest of Europe, but the town rebounded and continued to thrive. Johannes Gutenberg lived in Strasbourg in the 1440s, and experimented there with using and making movable type before deciding to set up his first press in Mainz. One of the world's first specialist eyeglass shops opened in Strasbourg in 1466. These sorts of developments were taking place all over Europe: new technologies like better ships, mechanical clocks, and printing, and new businesses like eyeglass shops, paper mills, and factories that mass-produced stoneware bottles. The modern world was stirring. This photograph shows a district known as Petite France where the town's wealthy burgers lived, now a centerpiece of all tours. 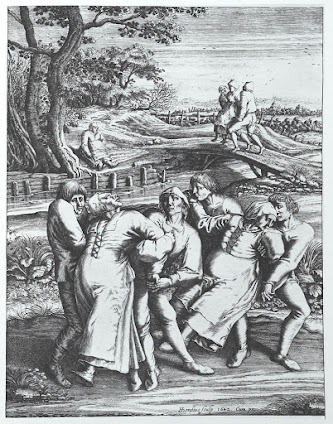 In 1518 the town witnessed a strange and still famous event, the Dancing Plague. It began when one woman started dancing in the town square and continued until dropping from exhaustion. Others joined in, and the plague lasted for about three months. People disagreed at the time about what was going on and still do. Some observers said that while people did try to fake having the condition, you could tell the difference because they simply could not dance as long as those really caught up in the Plague. Some sort of contagious hysteria seems like the most likely explanation to me. This contemporary engraving is supposed to be based on a drawing by Pieter Breughel the Elder, who witnessed the dancing first hand. 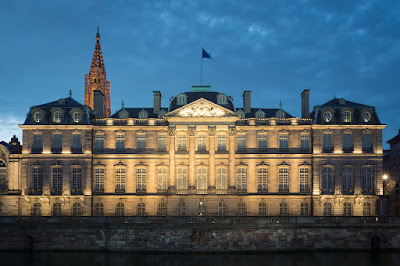 Palais de Rohan, Construction begun 1742 for a bishop of the noble Rohan clan

The town was a key site in the early days of the Reformation, and in 1605 saw one of Europe's first daily newspapers. In 1681 it was conquered by the armies of Louis XIV, becoming part of France. 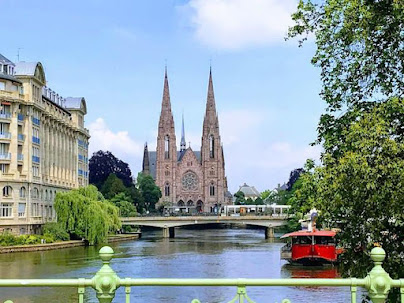 In 1871 it passed back to Germany and remained German down to 1918; many new buildings were constructed then for the town government and so on. 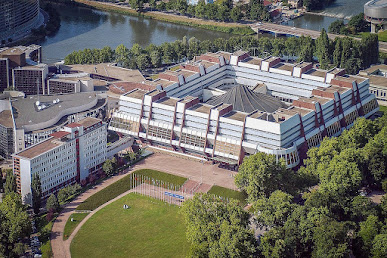 In 1977 it became the site of the European Parliament, which was housed in this ghastly modern building. 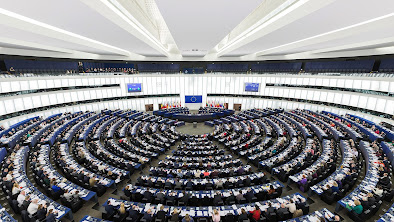 In 1992 the Parliament moved to this equally horrible building. The aesthetic bankruptcy of the EU is on full display here. People might not hate them so much if they knew how to design less ugly buildings. 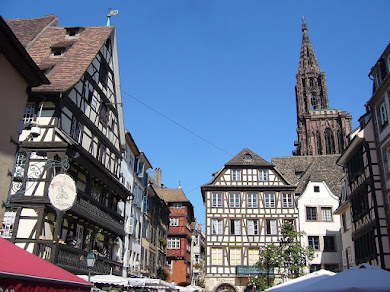 What an extraordinary history, and how marvelous that so many monuments survive to help us remember it. 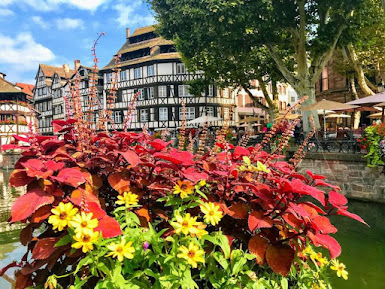 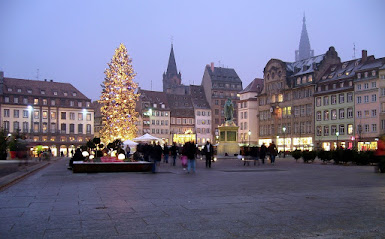 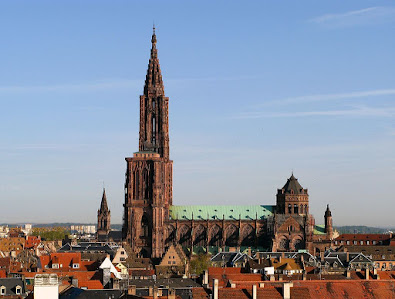