Solar Panels at the Community College 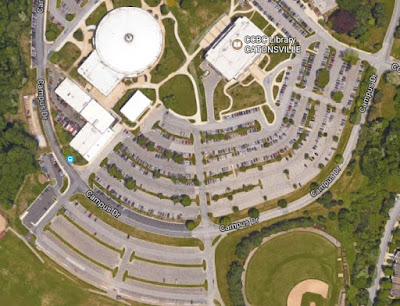 I was doing one of my parental duties yesterday, teaching another child to drive. The traditional place to practice driving in my neighborhood is the parking lots of the Community College of Baltimore County, which as you can see from this Google Earth aerial are extensive. On Sundays they are nearly empty. 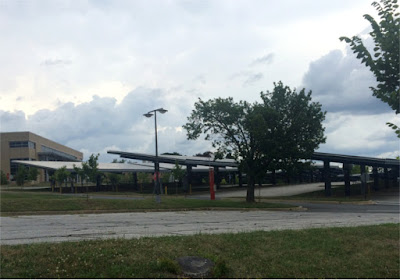 I hadn't been there in about two years, so I was rather startled to discover that they now look like this. Constellation Energy has put up these "solar carports" at three CCBC campuses, with a total output of 5.1 megawatts. They cover about half of the parking lot array in the aerial photo. I discovered that they have actually been there for about 18 months, so Google needs to get cracking on keeping Earth up to date. Presumably they aren't worried about updating the images for southwestern Baltimore County because nothing ever happens here. Ha! 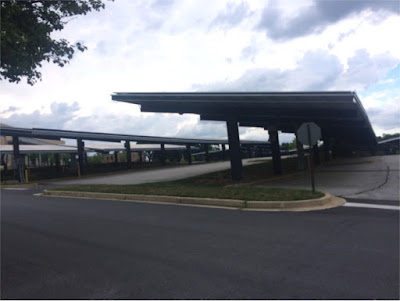 My son and I differed about the effect. He said he found them "oppressive." I rather liked them, because especially in summer what I find oppressive is acres of asphalt exposed to the burning sun. Shade is good. Shade from solar carports is not as nice as shade from trees, but better than nothing. And I would much rather solar panels go up over parking lots than over green fields. In fact I think a goal of covering all the big surface parking lots in America with solar carports makes sense. 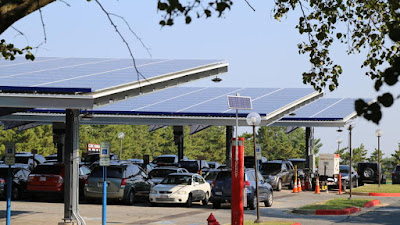 (Baltimore Sun photo, taken on a day when it wasn't about to storm and probably not by holding a phone out the window of a moving car.)

This seems to be the future. But note the scale of this. To power our civilization with the sun means devoting a lot of acreage to solar panels. This installation felt big to me, but CCBC estimates that over 20 years it will only supply 27% of their energy needs. This is why I think we will never get to anything like 100% solar power, or 100% solar + wind. It just takes too much space. We need other approaches: natural gas for the next few decades, then hydro, nuclear, eventually fusion, and maybe especially more effort on saving energy. I have posted here before about technologies that make houses and office buildings energy neutral (they produce as much power as they use, from quite small solar arrays), and we need to keep working harder in that direction.
Posted by John at 8:15 AM

Let's not get ahead of ourselves on fusion. We need to actually, you know... invent it, first.

Definitely I think reducing energy waste is one of the big steps in our future. There are a lot of firmly established techniques for making buildings more energy efficient that we simply do not employ on a regular basis.

Some of that will be technological improvements, such as incandescent and flourescent lights being phased out for LED systems.

Some of it will be architectural, going to greater lengths to properly insulate buildings, making better use of passive systems for temperature control, and making use of natural sunlight for illumination instead of using electricity to create artificial light.

Some of it will be economic, providing state and federal funding and resources for modernizing or replacing many buildings whose age makes them inefficient.

Some of it will be legal, modernizing or putting into place building codes that promote high standards of efficiency.

And of course, a big part of it will have to be cultural. We'll need to foster a shared value for energy efficiency and avoiding waste. We might look to placed like Japan or Europe for help or ideas on that.

What if we could just figure out how to live on that 1/3? My old college was built in... the 60s? Horrible, climate-inappropriate architecture. Always cooled to 65 degrees, even when it was 106 outside, always having the A/C compete with giant un-shaded south-facing walls. And those buildings are all still in use! How much electricity would they not need in the first place, if the architecture were better thought-out, and we didn't have a phobia of sweating?