The Curious Case of John Lambe and George Villiers 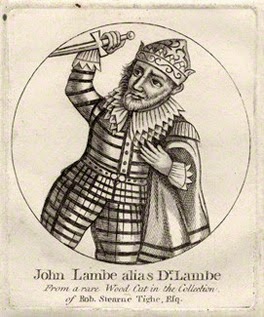 John Lambe was a seventeenth-century astrologer and quack who had a very interesting career. He enjoyed a brief brush with fame as adviser to George Villiers, the Duke of Buckingham, who was one of Charles I's closest confidants. (It all ended badly.) But Lambe started as a regular country mountebank:


In youth he was tutor in English to gentlemen's sons, and afterwards studied medicine, but soon fell "to other mysteries, as telling of fortunes, helping of divers to lost goods, shewing to young people the faces of their husbands or wives that should be in a crystal glass," and the like.

As his reputation grew, it also grew more sinister:


While practising his magical arts at Tardebigg, Worcestershire, he was indicted early in 1608 for having practised 'execrable arts to consume the body and strength of Th. Lo. W.,' apparently Thomas, sixth lord Windsor of Bromsgrove. He was found guilty, but judgment was suspended, and he soon gained his liberty. In May 1608 he was residing at Hindlip, Worcestershire, and on the 13th of the month was arraigned at the assize on a charge of having invoked and entertained 'certain evil and impious spirits.' It was proved that he caused apparitions to proceed from a crystal glass, and prophesied death and disaster with fatal success. He was again convicted and was imprisoned in Worcester Castle. It was asserted that after his second trial 'the high sheriff, foreman of jury, and divers others of the justices gentlemen then present of the same jury died within a fortnight.' The local authorities consequently petitioned for his removal to King's Bench prison in London. He was taken thither, and was apparently kept there in easy confinement for some fifteen years. His fame as an astrologer rapidly spread through London, and he was allowed to receive his numerous clients in the prison. 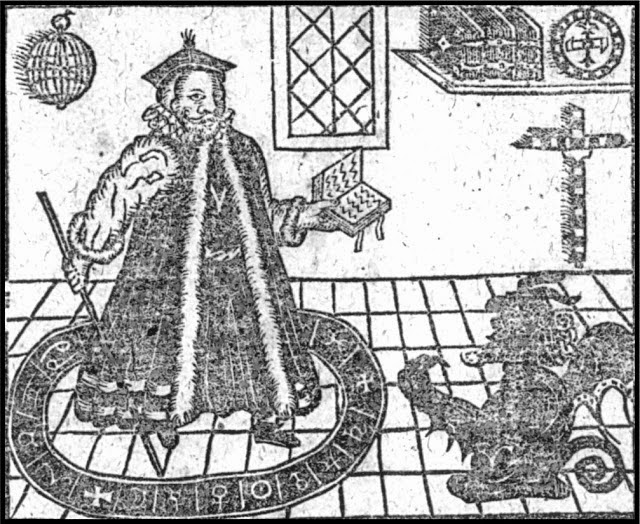 Among the people who came to the prison to consult Lambe was Buckingham. Here we have a splendid case of human ambivalence toward rumors of dark power: Lambe's reputation got him sent to prison but also got him the ear of the king's favorite. There does not seem to be any record of the advice he gave Buckingham, but considering what eventually happened to both Buckingham and his king, it can't have been very good.

Wikipedia has more tales of his magical doings:


Over time, many Londoners came forward with their own unusual anecdotes attesting to Lambe’s "demonic" nature. Some claimed that he had struck political foes with impotence, and others blamed him for a 1626 whirlwind along the Thames which allegedly unearthed corpses in a churchyard. One of the strangest accounts is recorded in Richard Baxter's 1691 Certainty of the World of Spirits. According to this story, Lambe once invited an audience into an inner room of his house, where he demonstrated his powers by conjuring a miniature tree and three miniature woodsmen, who chopped it down. One man allegedly gathered wood chips from the tree as evidence, but the pieces attracted violent storms to his house, and he soon disposed of them. Skeptics continued to scoff at such accounts, dismissing Lambe as "a notable mountebank and impostor", but many others were firmly convinced that Lambe was a dangerous magician.

This performance sounds like just the sort of thing practiced by 19th-century spiritualists, with strange lighting effects employed to turn real children into ghostly apparitions.

Charges against Lambe multiplied, including one of raping an 11-year-old girl (for which he was convicted but pardoned). Suspicion of Lambe got mixed up with the public's growing dislike of Buckingham and his influence on the king, and when Buckingham was attacked in Parliament ballads about Lambe's sinister influence were sung in the streets: 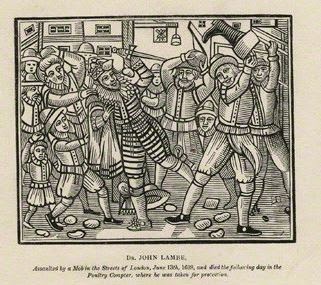 Buckingham remained beyond the reach of the mob, but not so Lambe:


The populace was excited by such reports, and on Friday, 23 June 1628, as he was leaving the Fortune Theatre in Finsbury, Lambe was attacked with stones and sticks by a mob of apprentices, who denounced him as 'the duke's devil.'

Lambe was rescued by constables but died the next day of his wounds. Buckingham's opponents took heart from the fall of his magician, and they began to sing new songs:


Let Charles and George do what they can,
The duke shall die like Doctor Lambe.

A few months later Parliament tried to impeach Buckingham, but the king protected him by dissolving Parliament. This led to even more anger against the favorite, and he was soon stabbed to death by a disgruntled army officer with a personal grudge. The officer was hanged but became a popular hero, and the song changed:


The shepheard's struck, the sheepe are fled,
For want of Lambe the Wolfe is dead.

Every so often it occurs to me that when people fall from power in our system they are not executed for treason or torn apart by mobs, and that this is rather remarkable in human history. Not that some of them don't deserve a fate worse than a comfortable retirement or a posh job in a lobbying firm, but on the whole I think peaceful change is better for all of us.
Posted by John at 7:08 AM