The Bear Cult of Ust-Polui 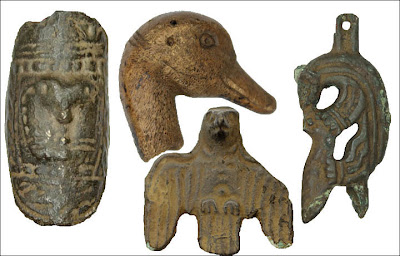 Russian archaeologists working at the Siberian site of Ust-Polui have uncovered evidence that it was a major ritual center in the first three centuries CE. These bronze objects were manufactured at the site, north of the Arctic Circle. 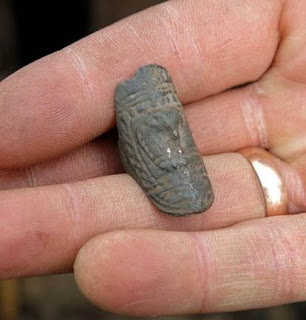 This year's most impressive find is this bronze ring, of which archaeologist Andrey Gusev says:


Ust-Polui is rich in such objects. More than this, many of them have genuine artistic value and help us understand something about the beliefs of these ancient inhabitants. This is the case with this ring showing the head and paws of a bear, which we have found this year. The ring is tiny in diameter so even a young girl, let alone a woman, cannot wear it. We concluded that it was used in a ritual connected with a bear cult and was put on the bear claw. . . . After killing the bear they had a bear festival to honour the animal's memory. The head and front paws a bear was adorned with a handkerchief, rings, and a few days lying in the house. This combination of images on the ring and the fact that it was found in the sanctuary of Ust-Polui led us to believe that it was the site of a bear cult.

So this ring was made to fit on the claw of a dead bear. Are there ethnographic parallels? This is wikipedia's description of the "bear cult" among the ancient Finns:


After a successful bear hunt, a celebration called karhunpeijaiset (literally "celebration of the bear") was arranged in honour of the slain bear. The purpose of the ceremony was to placate the bear and to convince its soul that it was greatly respected by the people. The bear was so feared that some of the songs sung during the ceremony were meant to convince the bear it hadn't been slain by the hunters, rather that it had killed itself by accident. The people presiding over the ceremony tried to make the bear's soul happy so that the bear would want to reincarnate back into the forest. After the bear's meat was eaten, the bones were buried. The skull, however, which was believed to contain the bear's soul, was placed high upon the branches of an old pine tree. This tree, kallohonka (skull pine), was probably a symbol of the world tree and the ceremony was meant to deliver the bear's soul back to the heavens, from where it had originated. From the heavens, the bear would come back to walk the earth. 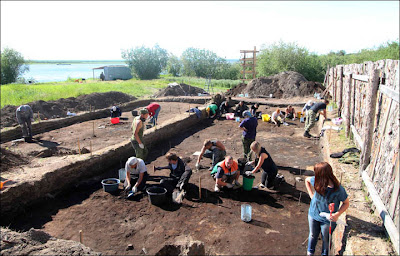 The Ust-Poloi Site has a great and very Russian history. Excavations began in 1935-36, and 18,000 artifacts were recovered, but then excavation leader Vasily Andrianov was arrested by the NKVD, accused of counter-revolutionary activity, and executed. Work did not resume until 1993, after the Soviet Union had fallen. 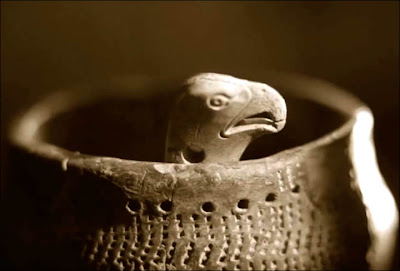 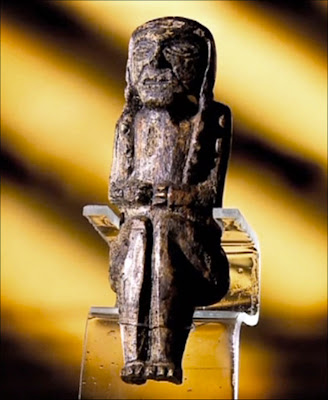 Above, some artifacts found at the site in the 1930s -- a seated man carved of bone, and a ceramic dish with a bird effigy. The leader of the excavations in the 1990s, Natasha Federova, wrote this description of one part of the site


Along the edge of the terrace and the northern side of the cape three fire places were excavated, located at a distance of not more than 3-5 m from one another. They were confined into a wooden frame and had a birch bark flooring for protection from moisture, around them were the artifacts layouts: arrow heads from bone and antler, bone spoons and blades with sculptured animal heads, parts of compound bows, knife hafts. Around the fire place on the bank of the river Polui many of the crucible fragments were collected - the vessels for melting and casting of copper, as well as the slag, that remained from the process. Most of the unique artifacts were found in the excavation adjoining the bank, in particular the the bas-relief models cut from shale, that were used for bronze castings. In the northern part of the site a big heap of large stones was investigated, and traces of fire were found on some of them. Near that heap certain actions left traces, most likely related to rituals: a heap of wood chips, between the layers of which a birch bark box was found with the mummified bird figure, a skeleton of a sable, several dog's skulls, and fragments of birch bark artifacts, including a rectangular plate with square holes cut in it. Lower, almost in the ravine, the foundations of two small oval structures not bigger than 2 meters in length were excavated. The walls were made from wooden blocks placed on a rib, in the foundation of one there was a dog's skull, and the northern walls were sluiced with some organic liquid - black and oily to the touch. In the same part of the site two female burials were found. One of the buried women was placed on her side on birch bark bedding.

What a fascinating place.
Posted by John at 7:17 AM