Some Guys Have All the Luck 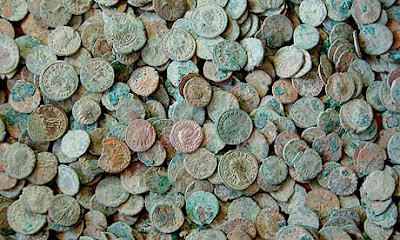 Like the one who found a hoard of Roman coins buried in a field in Somerset, England:

A total of 52,500 bronze and silver coins dating from the 3rd century AD – including the largest ever found set of coins minted by the self proclaimed emperor Carausius, who lasted seven years before he was murdered by his finance minister – were found by Dave Crisp, a hobby metal detectorist from Devizes, Wiltshire.

Crisp first dug up a fingernail-sized bronze coin only 30cm below the surface. Even though he had never found a hoard before, when he had turned up a dozen coins he stopped digging and called in the experts, who uncovered a pot bellied pottery jar stuffed with the extraordinary collection, all dating from 253 to 293 AD – the year of Carausius's death.

Just giving them a preliminary wash, to prevent them from sticking together in a corroded mass as the soil dried out, took conservation staff at the British Museum a month, and compiling the first rough catalogue took a further three months.

How they got into the field remains a mystery, but archaeologists believe they must represent the life savings of an entire community – possibly a votive offering to the gods. A Roman road runs nearby, but no trace of a villa, settlement or cemetery has been found.

The British experts dealing with the hoard note that it weighs more than 300 kilograms (650 pounds), too large for one person even to carry it to its burial place. They also note that the time of its burial did not correspond to any particular crisis or invasion -- there was civil strife within Britain at the time, which produced a couple of usurping emperors, but no big battles, and we have no evidence of widespread purges. One of the experts speculates that it was a votive offering made by a whole community. I wonder if maybe it was the treasury of a would-be usurper, say an army commander who built up a war chest in preparation for his uprising but then was caught or assassinated before he got going, or else a rebel who was defeated so quickly that he didn't make it into our sources.
Posted by John at 7:45 AM