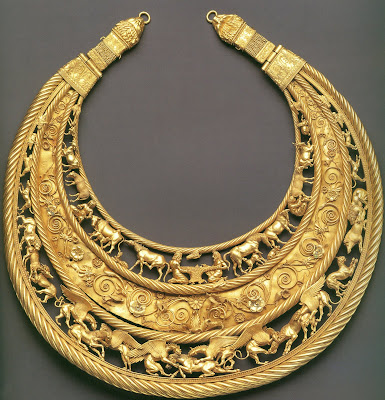 I had so much fun with the catalog from the Afghanistan: Hidden Treasures exhibit, which I got from the library, that I was inspired to track down the catalog from my favorite ever museum exhibit. This was Scythian Gold: Treasures from Ancient Ukraine, which I saw in Montreal in 2000. I tried to get a new copy of the catalog at the time, but it sold out everywhere. This time I found a used copy through ABE Books, and since it arrived I have been immersed it its glories. These treasures came from the tombs of Scythian kings and nobles, dating to between 600 and 200 BC.

Most of the spectacular golden treasures were made by Greek craftsmen, probably in the Greek colonies around the Black Sea. Some of the designs seem entirely classical in inspiration, but many were obviously made specifically for Scythian clients. They depict people with Scythian clothes and weapons, for example, and some seem to show scenes from Scythian mythology. The famous "Golden Fleece" pectoral (above -- click for a larger image) is one of those objects. It is divided into two bands, one showing the domestic life of pastoral peoples, the other showing lions and griffins hunting horses and boars.

My favorite object is one of the locally-made pieces, the staff top shown below. Surely this was carried by a Scythian shaman -- it resembles staffs carried by Siberian shamans in the 19th century -- as he recited his tales of journeys to the Other Lands, made his prophecies, and performed his cures. 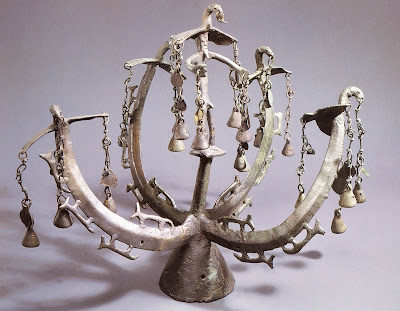