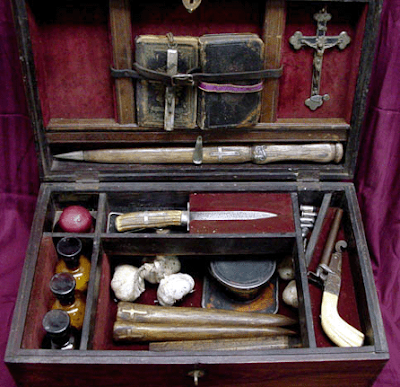 There is stuff all over the net about nineteenth-century vampire killing kits, but Urban Legends isn't buying it.

As they report, the documentation on the website of Sotheby's auction house is equivocal:

Professor Ernst Blomberg reportedly assembled his kits in the nineteenth century. Many experts, however, believe that his kits were assembled in the early twentieth century in response to the interest in vampires sparked by the popularity of Bram Stoker's 'Dracula' published in 1897.

I like the second explanation. Vampires just weren't a big part of the western European imagination until after Stoker's best seller. Yes, people had heard of them, there were some obscure books, and there were even scattered legends about corpses that walked and had to be dug up and burned. But not enough to trigger the level of interest shown in these kits.
Posted by John at 8:16 AM