A Critic after my own Heart

Time has killed off a lot of modernist art. College courses that teach Gertrude Stein must be awfully undersubscribed today, assuming they are offered. Modernist sculpture and painting still receive respectful attention, but this is largely because people have so much money invested in them. It will be surprising if Mark Rothko, Henry Moore, Josef Albers, and Andy Warhol are still preoccupying any serious person (let alone commanding top dollar) 50 years from now. People who don't like them (most people) can avoid them....

But the architectural remnants of the age cannot be avoided. They endure--with their windowless façades, their human-repelling scale, their masses of dirty concrete and their self-conscious wish to shock. Worse things happened in the 20th century, but few were more puzzling than the way Americans let their landscape be ravaged by architects and planners, particularly in the years between World War II and the 1980s. Here a neighborhood of elegant storefronts would be demolished "for parking." There a row of century-old trees would be uprooted so that cars could whiz by at 60 rather than 45 miles an hour. Josep Lluís Sert's ghastly Holyoke Center still occupies the spot in Harvard Square where Massachusetts Avenue's beautiful line of Victorian brick was ripped apart to make way for it in the 1960s. Gerhard Kallmann's Boston City Hall still sits like a Stalinist mausoleum on an empty, windswept plaza, for which dozens of ancient city blocks were razed.

-Cristopher Caldwell in the Weekly Standard

Below, the Boston City Hall. One can only shudder. And it's worse in person. 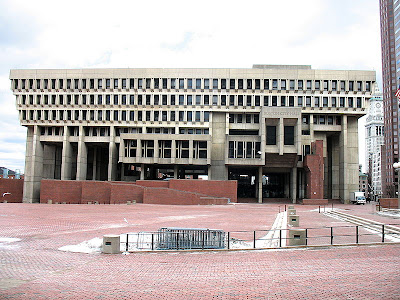 Some of us like modern buildings. Can you see the turtle hiding in this one?
KG

No, I don't see a turtle. Unless it's an upside-down dying turtle ;-)

As I said in one of my bensozia essays, it isn't the existence of modernist buildings that offends me, its the complete absence of the kind of decorated buildings I do like. I don't mind that some buildings looks like this, but why do they all have to?