Real Quantum Computers: the D-Wave One 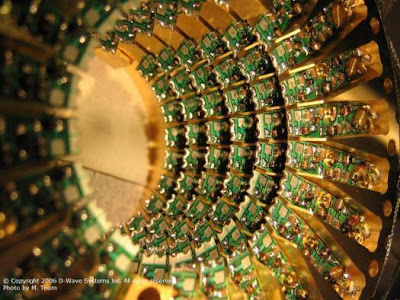 I thought quantum computing was still a laboratory curiosity, and I had no idea you could actually buy one. But Vancouver-based D-Wave Systems has claimed a couple of successes lately. Their latest model recently performed the largest calculation yet completed by a quantum computer, a fiendishly difficult problem called a "two-color Ramsey number." And, they have sold one of their $10 million D-Wave One computers to Lockheed Martin, along with a multi-year contract to keep it working.

Rather than the standard binary bits of a digital computer, which must be either 0 or 1, quantum computers use "qubits" that can be 0 and 1 at the same time, or, more accurately, several different combinations of 0 and 1, with the details depending on which technology is used. This has the potential to be vastly faster and more powerful than digital computing, but the road from the first quantum calculation to the market has been long and expensive. The idea for quantum computing goes back to the 1960s, and Richard Feynman showed in 1982 how it might be done in practice. The field got a big boost in 1994 when Peter Shor developed a quantum algorithm that could factor very large numbers efficiently, defeating the most common encryption systems. The first actual quantum calculation was performed in 1998. So this is still very new technology. In a decade or two, though, computing may make another giant leap in power.
Posted by John at 8:49 AM