Jonathan Stroud I: the Bartimaeus Trilogy 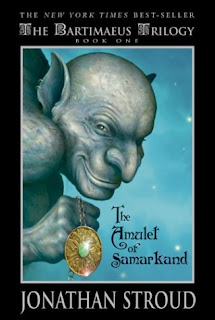 I have spent a substantial part of my driving time this winter listening with great pleasure to juvenile books by Jonathan Stroud. First, I listened to the Bartimaeus Trilogy. This is a fantasy set in the Britain of a world like ours, but with magic. The date is some time in the early twentieth century, and the world has a fascinating alternative history. The main characters in the first book are a boy magician and a 5,000-year-old demon, Bartimaeus. Bartimaeus is a great character, witty, extremely resourceful and even more egotistical. I loved the parts about him. The boy magician, Nathaniel, is something of a problem. He has great magical ability but is physically a wimp and, worse, a jerk, constantly saying grossly insensitive things. I expected that over the course of the three books he would acquire better manners and more sense, but he never really does. He blunders through to the end, with a lot of help from the very much wiser Bartimaeus. There is a strong political theme in the novels, involving democratic agitation against the aristocratic cabal of the magicians. This is a nice change from the usual aristocratic bias of fantasy, especially any fantasy that focuses on wizards. I expected Nathaniel's political views to evolve, but they don't change any more than his manners, and he remains a snobbish magician scornful of commoners until just before the end of the third book. He does redeem himself in the finale, but I think Stroud missed a great opportunity by not having him slowly develop a conscience.

Instead we see the democratic agitators through the eyes a common girl named Kitty Jones, who becomes a prominent character in the second and third books. Kitty Jones has all of the good qualities that Nathaniel lacks, especially physical courage, tact, and sensitivity to the plight of the downtrodden. Nathaniel and Kitty start out as enemies but eventually end up working together (thanks to Bartimaeus) to save Britain and maybe the world.

The plot is pretty good, and along the way we are treated to a host of magical wonders. The villains are villainous and their plots nefarious. But the real genius is the character of Bartimaeus, who wisecracks his way through human history from the court of King Solomon to the Prague of the alchemist-emperor Rudolf, cleverly defeating stronger enemies. Thanks mainly to him, I liked these books a lot and was sad when the last one ended.
Posted by John at 7:22 PM